About Us
News & Press
In My Room reviewed: Visceral Physicality and Troubled Silences
News 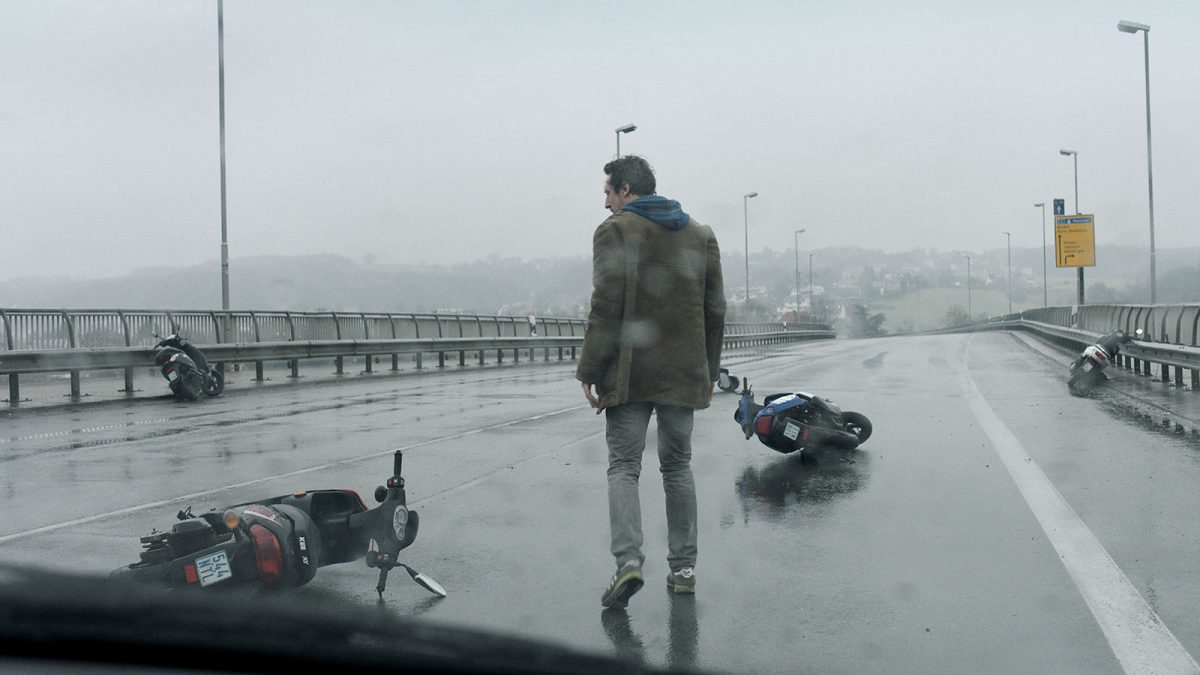 In My Room reviewed: Visceral Physicality and Troubled Silences

With his long, static takes and general lack of non-diegetic music, director Ulrich Köhler conjures a world of troubled silences and stoic, deliberate movements in his droll, minimalistic survival drama, In My Room. In My Room is the story of a man who awakens from his dull, quotidian life to discover the earth is suddenly uninhabited, and must abruptly face the full weight of complete self-reliance.

Our protagonist Armin is shown living an apathetic existence in a small alpine German town, having sexually frustrating outings to nightclubs, arguing with his coworkers and visiting his taciturn parents and dying grandmother. He’s gruff and brooding, but also hapless and shy. The mysterious cataclysm which depopulates the world feels allegorical, Armin’s grief and loneliness made physically manifest. In his glacial, detail-oriented realism, Köhler makes the mundane seem catastrophic and the catastrophic seem mundane.

Many scenes emphasize the visceral physicality of birth and death, nutrition and physical pain. Köhler portrays the collapse of civilization as an opportunity to focus in on the rhythms of biological life (both at their prettiest and ugliest) and affirm humanity’s place among the animals. Once Armin establishes a homestead with livestock, the visual style makes a shift towards radiant, pastoral imagery that feels medieval or biblical. This is most highlighted in a scene where Armin awakes in the middle of the night to witness one of his goats giving birth, framed and lit like a Dutch Baroque painting of the Nativity.

In My Room’s greatest strength is panoramic, almost surreal imagery – a riverboat party cruise vanishing into a winter night and washing up empty next morning, or Armin on horseback with a rifle at his side, looking out at an overgrown freeway from a store parking lot. In these moments we fully see the grandeur and desolation of Germany after people, and also get a feel for the absurdity of the Anthropocene.

Conversely, the film is at its weakest when exploring interpersonal dynamics and conversations. Loneliness and awkwardness are deliberate themes in In My Room, but the stilted and lifeless tone of the film’s dialogue feels only half-deliberate. For the most part, the characters don’t feel terribly distinct in their habits, viewpoints or demeanor, and Armin is a lot more likable and sympathetic in isolation than among other human beings.

There is never an explanation for how or why humanity vanishes from the earth in In My Room, which lends the events a more dreamlike and almost magical realist quality when Armin first discovers the desolation of what was once his hometown. The world of In My Room raises more questions than it answers: Armin finds a dead body in a tunnel, but other than that, every human has simply vanished. This sense of looming mystery and investigation could have been explored more, but still provides an intriguing undertone to the film’s more microcosmic story.

The viewers get an even more limited and vague picture of how Armin acquired his survival skills in the first place. A photojournalist by trade, we are given no indication as to how or why Armin is so confident and undaunted at hunting wild game, rearing domestic animals, riding horses, constructing shelter and building simple machines. If we were given more backstory on his connection with the wilderness, he would be a more well-rounded and unique character, and if we saw him struggling to learn these skills after the cataclysm, there would be a greater sense of narrative stakes. As it stands, In My Room works as a parable and a collection of images but doesn’t always have a strong throughline as a narrative work of drama.

Armin certainly seems more comfortable in his skin when he’s milking goats in an abandoned heath than scoping out potential partners on the dancefloor. But at the same time, In My Room is a wary critique of this notion, an exploration of the ways that self-sufficient living can be just as much of a trap as life in society.

In My Room is a film that isn’t afraid to be alienating – it’s deadpan and misanthropic, with endless stretches of near-silent long takes. However, for those intrigued by stories of Armageddon, In My Room is a raw and unfiltered take on a well-worn genre that offers lush cinematography and moments of startling visual poetry.