All VTFF 2021 films are viewable only in Canada, with the exception of Leave the Door Open (Bırakın Kapı Açık Kalsın), which can be viewed in Canada and the US.

Please note that while this platform will process your purchase in USD, the exchange rate has been taken into consideration and pass values were set with CAD in mind.

Browse the virtual catalog below, or on VTFF 2021’s Eventive page

** VTFF 2021 is co-presented with SFU Woodward’s Cultural Programme and NWFF. **

The 8th Vancouver Turkish Film Festival returns in 2021 with eight award-winning feature films, including one documentary. The festival opens with an in person film on Dec. 10, and online screenings Dec. 11–18.

Founded in 2011 by a group of film enthusiasts, directors and industry workers, the Vancouver Turkish Film Festival is a collaborative effort that aims to showcase a variety of Turkish films.

The Vancouver Turkish Film Festival is organized by the Turkish-Canadian Society (TCS), a non-profit organization that continues to increase the public’s knowledge of contemporary and traditional Turkish art and culture. 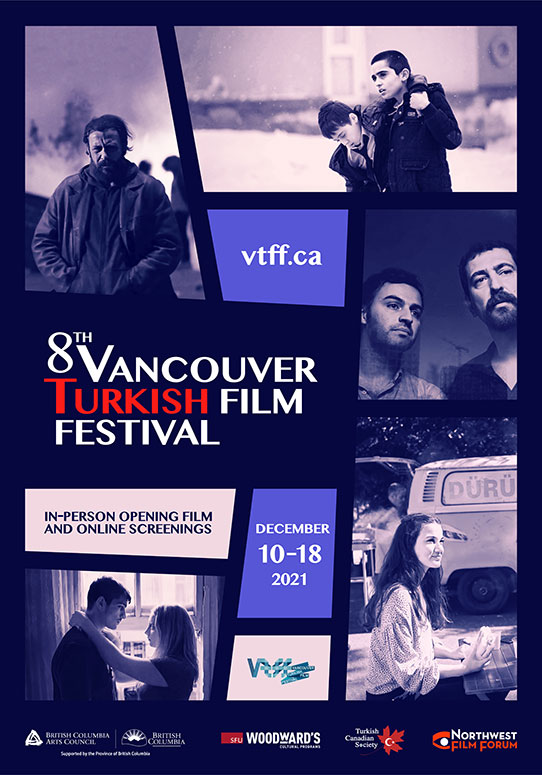 ** This screening takes place at SFU Goldcorp Centre for the Arts (149 West Hastings St., Vancouver BC) at 6:30pm PT and is ticketed separately from the virtual festival pass. **

Duygu and Bahadir work as debt collectors; their job is to maximize profit by cornering debtors using psychological tactics. Ceren, a young woman deep in debt, is their new target.

During his military service in 1990s Southeast Turkey, Ahmet experiences something that will haunt him for the rest of his life.

After a worker is severely injured in their family business, Kadir is forced into making a moral decision, which will have an impact on his dreams, his family and the life of the injured worker’s wife.

Set over the course of one tense day at an isolated boarding school, this moral drama follows a boy’s desperate fight to save his sick friend despite the obstructions of a rigid bureaucracy.

A family’s divisions along lines of faith and economics are exposed by a visit from someone to whom they owe an unpayable debt.

A documentary about how a love of Jazz led two young sons of a Turkish diplomat posted to Washington DC in the late 1930s and 1940s to smash through racial barriers and segregation.

Ayhan is a police officer who leaves his job and moves to a forest to start anew, far from the force and all the baggage that comes with serving. There, he meets a strange man, Karadayı, who imparts a warning to him about weasels and the ill that befalls those who would kill them. When Ayhan kills a weasel by accident during an uneasy hunting outing, Karadayı’s warning rings in his ears, and memories of his troubled past return to haunt him.

The dreams of Fehmi, an aspiring 19-yr-old rapper from a rough neighborhood of Istanbul, are jeopardized by drug addiction. He falls in love with Devin, a DJ, but their turbulent lives quickly turn their passion into a toxic relationship.