Each program in the festival is ticketed individually

** Engauge will screen only films that originated on film – read on to learn which screenings are presented on celluloid! ** 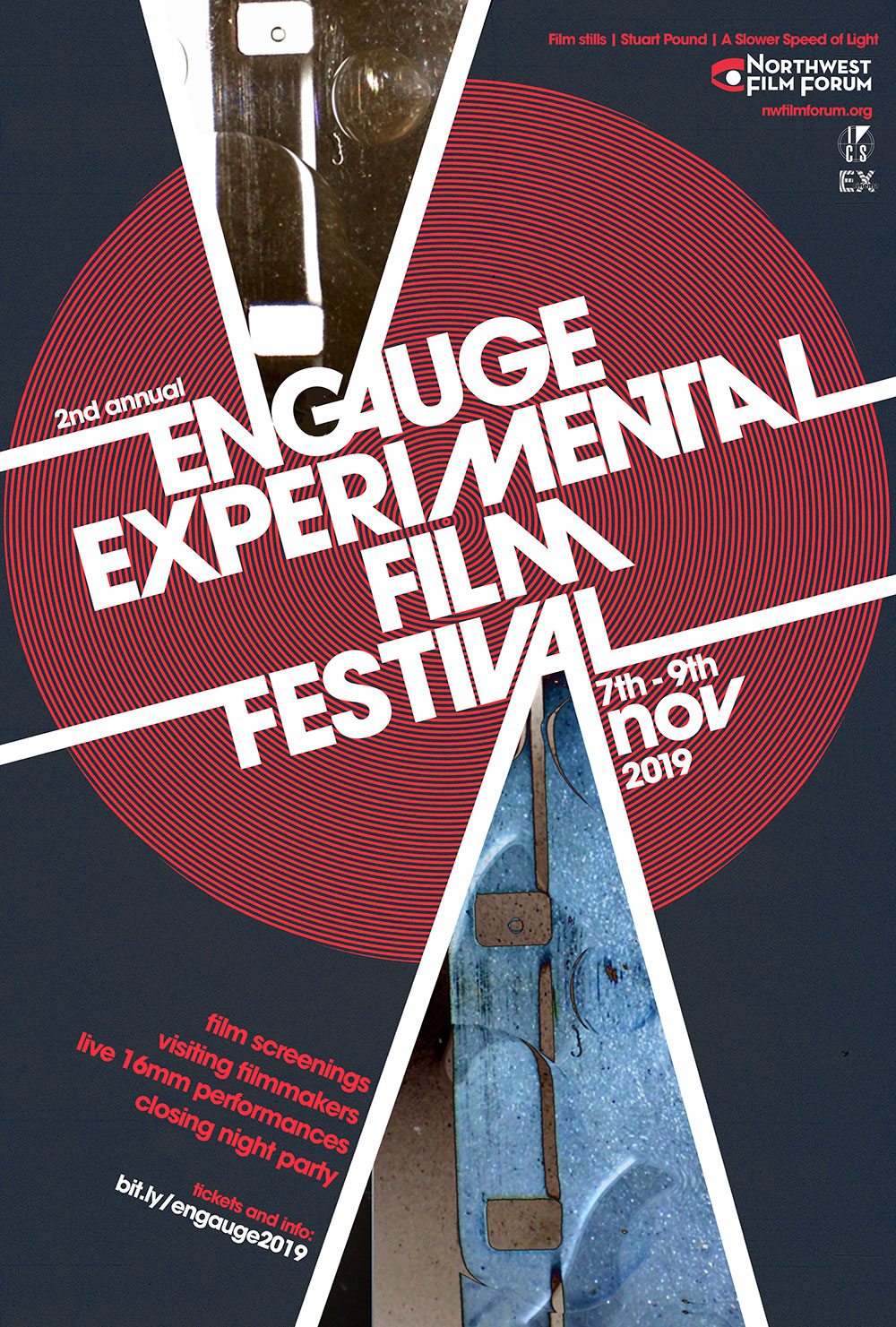 Each Fall, Engauge Experimental Film Festival hosts screenings sponsored by the Interbay Cinema Society in partnership with Northwest Film Forum. The festival screens only work that originates on film, by filmmakers both local and international.

This year’s festival features films from 20 countries and 11 states:

For fans of direct animation, contact printing, and photograms – this is a dream workshop. No filmmaking experience is required to participate. No cameras means no new devices to learn the quirks of, no lenses to focus; no muss!

Experimental filmmaker and Emerson College Visual and Media Arts Prof. Kathryn Ramey will walk students through a range of ultra-accessible filmmaking processes, starting with painting unexposed stock with developer, which can be done with the lights on, and then photogramming in the dark! Small objects and materials (go wild – paper clips, beads, seed pods, earrings, pencil shavings – anything goes) layered on film can be exposed with flashlights, then your film can be turned into a positive by overlaying it on dry, developed film. We’ll even add soundtracks from found footage.

Some processes are immediately satisfying, some more gradually, but all can make it to being looped and projected before the workshop lets out. Let your creativity run wild, experimentalists! For an example of what comes out of Kathryn Ramey’s cameraless workshops, watch a video here >

This workshop takes place at Pound Gallery, 1216 10th Ave. (between Pike and Seneca)

Instructor Kathryn Ramey is the author of the book Experimental Filmmaking: Break the Machine (Focal Press, 2016).

Don’t believe the people who tell you film is dead. This opening program samples the astonishing Super-8 work that is being made all around the world and right here in Seattle, featuring films from Argentina, Brazil, Canada, Germany, Greece, Italy, Ireland, the UK and the US. Several films incorporate found footage and/or home movie footage. All films are shot on Super-8 film and transferred to digital.

Nov. 8 at 7pm – Celluloid Dreams: The Cinema of Janice Findley

Beloved local filmmaker Janice Findley shows her work and reflects on her oeuvre, while preparing to step behind the camera again to produce a new body of work.

** All films photographed, edited, released, and projected on 16mm! Introduction by Todd Rendleman, Director of Film Studies and Professor of Communication at Seattle Pacific University **

Janice Findley’s fiercely original films explore enchanted, uncharted territory with a wildly imaginative sensibility. Utilizing meticulous stop-motion and live-action techniques, brilliant set and costume design with beguiling musical scores by musician/composer Paul Hansen, Findley creates a subterranean world of emotions that evoke waking dreams. Menacing, inviting and funny, these adventures of the mind dare the viewer to enter into the realm of dreams. Findley’s films have been showcased in a retrospective at MoMA in New York, where her work is part of the permanent collection, and have toured the hinterlands of the U.S. with a widely traveled bicycling projectionist. This remarkable compilation includes Beyond Kabuki, A Nermish Gothic, Tripletime, Faux Paw and I Am The Night.

“Findley’s plots are difficult to describe: They are driven by equal parts illusionistic film techniques and the filmmaker’s refreshingly untethered imagination. But if you imagine Alice in Wonderland done by a collaboration of …F.W. Murnau …Maya Deren …and Jan Svankmajer, you’ll have something of the idea.” – Randy Gragg, The Oregonian

Todd Rendleman is the Director of Film Studies and Professor of Communication at Seattle Pacific University where he teaches film art, history, and criticism. He is the author of Rule of Thumb: Ebert at the Movies (Bloomsbury, 2012) and he lives in Seattle, Washington.

Films about the play of time in filmmaking, including animation and time-lapse techniques.

Films that, for the most part, elide the human figure in favor of abstraction, handmade film, direct animation, and urban and rural landscapes.

On Saturday night, the Olympia-based filmmaking collective Crackpot Crafters return to Engauge with their special, immersive brand of LocaLoop craziness. This multi-artist, multi-projector expanded cinema event will fill the capacious West Ballroom with a phantasmagoria of projected and reflected new work, including 16mm photograms, scratched and painted film leader, and adulterated found footage, accompanied by live sound performance integrating synthesizer and cello. We invite you to roam the room, drinks in hand, interacting with projections and projectionists. Each guest receives a free drink with their ticket at the Tin Table bar.

This festival, presented by Interbay Cinema Society and Northwest Film Forum, is supported by EXcinema and The Sprocket Society.