The 2021 Sundance Film Festival Short Film Tour is a 95-minute theatrical program of 7 short films selected from the 2021 Sundance Film Festival program, widely considered the premier showcase for short films and the launchpad for many now-prominent independent filmmakers for close to 40 years. Including fiction, documentary and animation from around the world, the 2021 program offers new audiences a taste of what the Festival offers and shows that short films transcend traditional storytelling.

The Festival has always treated short films with the highest regard and gives a home to both established and new filmmakers with shorts for audiences to discover and celebrate. From documentary to animation, narrative to experimental, the abbreviated form is made for risk-taking. Short films are a significant and popular way artists can connect with audiences.

Credit for film stills below: An official selection of the Shorts Program at the 2021 Sundance Film Festival. Courtesy of Sundance Institute. Full photo credits are available here. 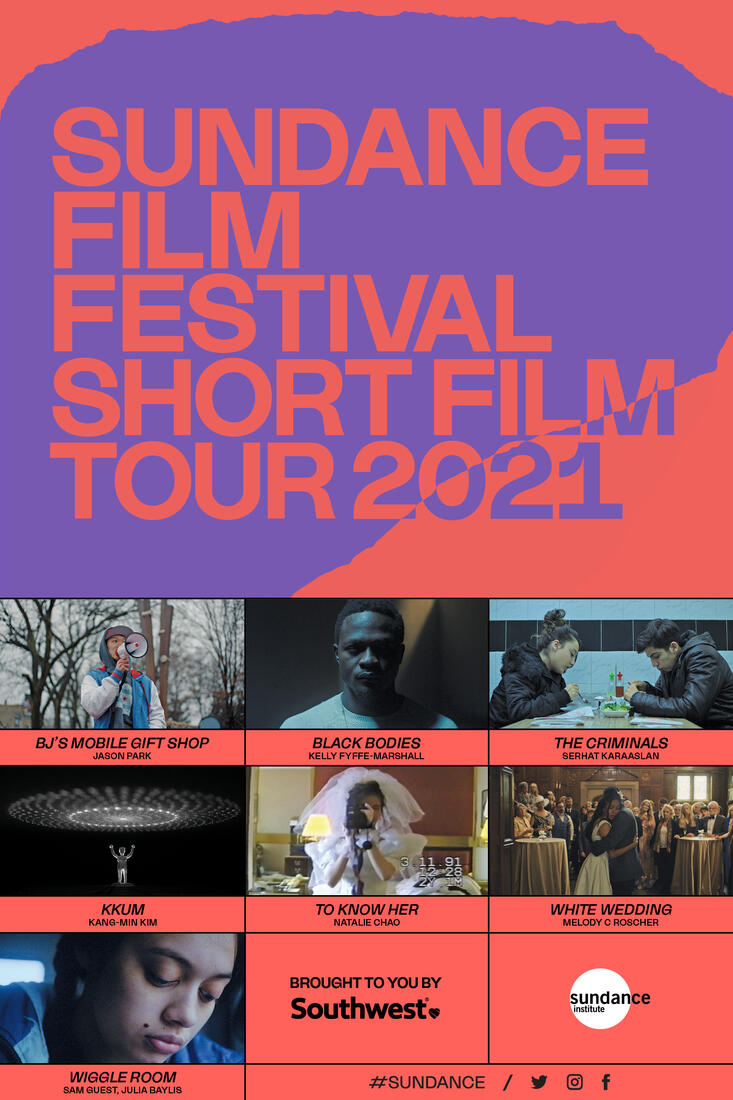 A young Korean-American hustler runs throughout the city of Chicago making sales out of his “mobile gift shop.” U.S. Fiction

Jason Park was born and raised in the city of Chicago. Jason Park pursued filmmaking after a year of missionary work on the island of Palau. He’s made several short films that have played in numerous international film festivals and has been selected for programs like Film Independent’s Project Involve and the Sundance Institute Screenwriters Intensive. He currently resides in Los Angeles, where he is developing his first feature film.

A Black man laments as he comes face-to-face with the realities of being Black in the 21st century. International Fiction

In a town in Turkey, a young couple is looking for some privacy. They are rejected from the hotels because they do not have a marriage certificate. When they think they have found a way, the situation gets out of hand. The Criminals received the 2021 Sundance Film Festival Special Jury Prize for Writing. International Fiction

Serhat Karaaslan has directed one feature film and several shorts. His short films were screened and awarded in major festivals like the Toronto International Film Festival and Festival del film Locarno. His debut film, Passed by Censor (Cannes Cinéfondation Residence), premiered at the 2019 Karlovy Vary International Film Festival, where it received the critics award, and won several awards at festivals around the world.

My mother’s dreams have always been strong premonitions for important moments in my life. I rely on her dreams more than any religion. Animation

Kang-min Kim was born in Incheon, South Korea, in 1979. In 2011 he graduated from the California Institute of the Arts. He is currently working as a freelance artist.

A poetic exploration of the camera’s gaze and a family’s relationship with the filmmaker’s mother. Non-Fiction

Natalie A. Chao is a filmmaker and cinematographer who completed her bachelor’s degree in film production at University of Southern California. Born, raised, and currently based in Hong Kong, she is interested in bridging the gap between realism and poetry in order to tell stories through a more engaged and intentional gaze—one that can map out our memories, not drawing lines between camera and subject, identity and politics. She is currently a 2020 Sundance Ignite x Adobe Fellow.

Amidst a racially tense Southern wedding, a biracial bride has the chance to confront her estranged Black father after accidentally hiring his wedding band to perform. U.S. Fiction

Melody C. Roscher hails from Richmond, Virginia, and New York City, and she is developing her feature directorial debut, Bird in Hand. In addition to directing, she’s half of the producing team The Wonder Club, with Craig Shilowich. Together, they are producing Robin Comisar’s upcoming feature Great Choice. Roscher recently produced Christine, James White, Creative Control, and Simon Killer, as well as line-producing HBO’s The Jinx.

Sam Guest and Julia Baylis are an American-Canadian directing duo who collaborate under their production company Anarene Films. Their projects have been featured on Dazed, The FADER, and NPR. Wiggle Room is their first narrative film.

About the Sundance Film Festival

The Sundance Film Festival is a public program of the nonprofit Sundance Institute which connects audiences to artists in igniting new ideas, discovers original voices, and builds a community dedicated to independent storytelling. The Institute has supported such projects as Sorry to Bother You, Eighth Grade, Won’t You Be My Neighbor?, Hereditary, RBG, Call Me By Your Name, Get Out, The Big Sick, Top of the Lake, Winter’s Bone, Dear White People, Brooklyn, Little Miss Sunshine, 20 Feet From Stardom, Beasts of the Southern Wild, Fruitvale Station, I’m Poppy, America to Me, Leimert Park, Spring Awakening, A Gentleman’s Guide to Love and Murder and Fun Home.

The Sundance Film Festival has introduced global audiences to some of the most groundbreaking films of the past three decades, including Clemency, Never Rarely Sometimes Always, Zola, On the Record, Boys State, The Farewell, Honeyland, One Child Nation, The Souvenir, The Infiltrators, Sorry to Bother You, Won’t You Be My Neighbor?, Hereditary, Call Me By Your Name, Get Out, The Big Sick, Mudbound, Fruitvale Station, Whiplash, Brooklyn, Precious, The Cove, Little Miss Sunshine, An Inconvenient Truth, Napoleon Dynamite, Hedwig and the Angry Inch, Reservoir Dogs and sex, lies, and videotape.

Each year the Festival receives close to 10,000 short film submissions and this year selected 50 to show. The Festival programs a collection of shorts from its most recent Festival for a theatrical tour of independent art houses in cities throughout the U.S. It is one of very few theatrical releases of short films in the United States.

The Festival is a program of the non-profit Sundance Institute. The support of these organizations helps offset the Festival’s costs and sustain the Institute’s year-round programs for independent artists.

Sundance Film Festival 2022: Every Day in Kaimukī [In-Person Only]

Sundance Film Festival 2022: Honk for Jesus. Save Your Soul. [In-Person Only]