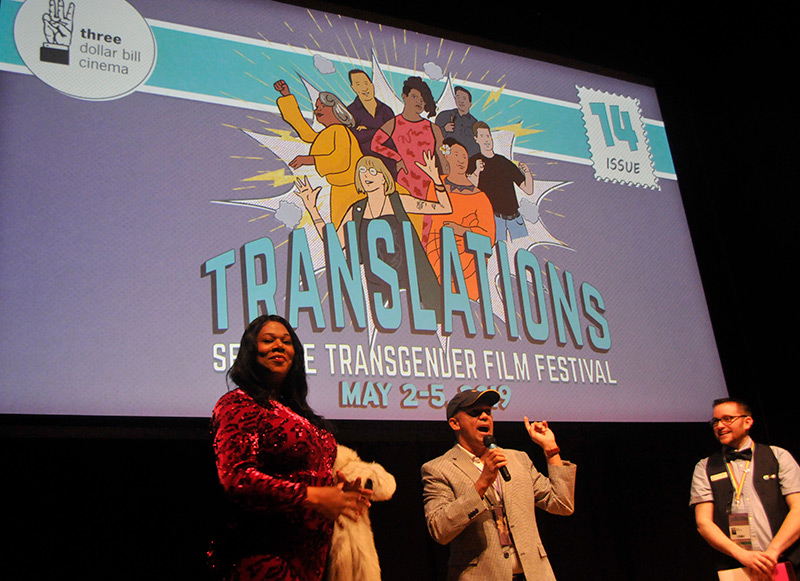 “After 25 years, TDBC, NWFF, and Gay City have more relevance and purpose than ever,” says Kathleen Mullen, Interim Executive Director at Three Dollar Bill Cinema. “All LGBTQ stories must have a visible and vibrant platform for expression. Through storytelling, we are able to show the complexity and diversity of our multifaceted lives and combat our rights being taken away during changing political times.”

By drawing upon their shared heritage and commitment to Capitol Hill—Seattle’s historically queer neighborhood—these three community strongholds will elevate diverse media arts programs as a means of raising awareness about LGBTQ issues and supporting local queer and trans creators.

“We join our partners in celebrating our silver anniversary,” adds Fred Swanson, Executive Director of Gay City. “For 25 years, Gay City has built resilience and joy in the LGBTQ communities. Our arts programs galvanize an audience to support queer arts and creates space for the diverse expressions of queerness—especially from Queer and Trans Artists of Color—that exist within our community.”

“By empowering one another and honoring our long-standing legacies, we can continue to stabilize safe spaces within Capitol Hill as we enter the new decade,” explains Vivian Hua, Executive Director at Northwest Film Forum. “The collective potential among our three organizations to generate new opportunities around queer education and exhibition has begun to play an increasingly pivotal role in shifting uninformed mainstream narratives.” 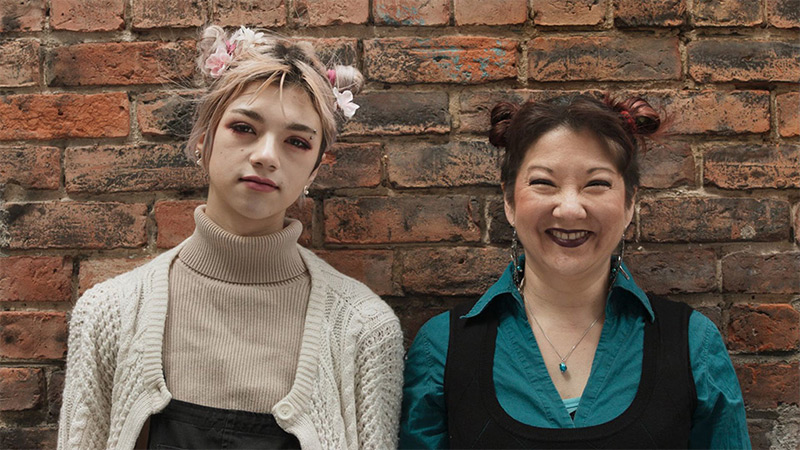 The first LGBTQ short film program ever presented at Northwest Film Forum’s Children’s Film Festival Seattle, Rainbow Roar features celebrate beautiful and complex stories of identity and diversity, featuring those who live fiercely in their authentic selves, reject stereotypes, and reach out to others who respect and affirm their journeys.

Children’s Film Festival Seattle (February 27 to March 8) is an annual cinematic extravaganza that celebrates the best and brightest in international films for children, including animation, feature length films, short films, and hands-on workshops. CFFS provides a joyous and dynamic setting that cultivates intergenerational relationships and inspires younger generations to participate as agents of change in their local and global communities. Details at childrensfilmfestivalseattle.org!

All other programs and screenings at Gay City: Seattle’s LGBTQ Center

Three Dollar Bill Cinema’s Translations Seattle Transgender Film Festival is a groundbreaking film festival that provides the Pacific Northwest with a venue for films by, for, and about transgender, non-binary, and gender-diverse people and the issues facing the community. In its 15th year, Translations places its emphasis on visibility and positive representations. Programs forthcoming!

May 28-30, 2020
And Then I Got Fired: On Being Trans, Unemployed & Surviving
Curated by J Mase III & Presented by Gay City: Seattle’s LGBTQ Center

For the second year in a row, And Then I Got Fired gives space for Trans Artists of Color to share the reality of (un)employment for Trans people. Through performance and stories, the show addresses the various ways Trans folks get shut out of 9 to 5 work and still make a living. Each night, performers spit poems, share stories, and dance on the graves of broken promises from the mainstream LGBTQ communities.video. 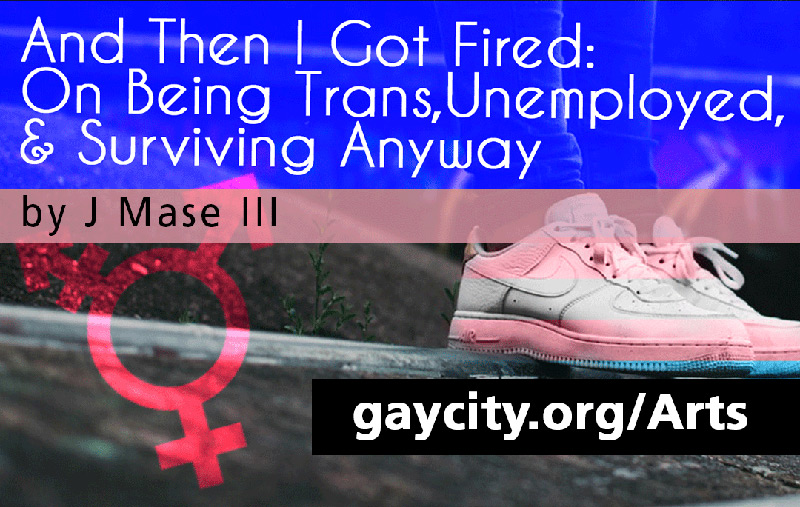 Sovereign, Seattle’s First Black Queer One Womyn Show Festival, highlights the multifaceted talents of black queer womyn. Earth Pearl Collective takes their one womyn tribute show to the next level by creating a full festival in 2020! One womyn shows from queer womyn of color will take the stage, presenting previews, viewings, and talkbacks with featured multidisciplinary artists.

Reel Queer Youth (RQY) is a video production and media literacy training for LGBTQ+ youth and allies ages 13-20. Offering training in professional cameras and editing equipment, youth will then work in small groups to create a finished documentary or narrative project. Details forthcoming!

Three Dollar Bill Cinema’s flagship program, Seattle Queer Film Festival, has been part of the Greater Seattle LGBTQ2+ community and beyond since 1996 when it was known as the Seattle Lesbian & Gay Film Festival and has become the largest festival of its kind in the Pacific Northwest. The festival has garnered national recognition for showcasing extraordinary and award-winning work. The festival is an important event in Seattle where the community gathers for films, education programs, events, and panel discussions, and people have a venue to express their creativity through film and video. 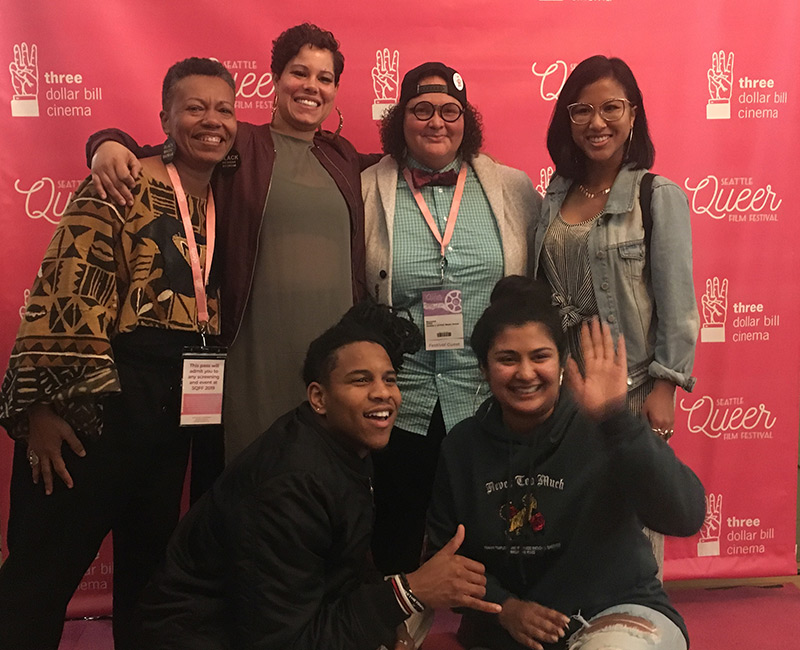 Join Three Dollar Bill Cinema as celebrate 25 years of queer cinema in Seattle with their 2020 gala theme, Out of the Celluloid Closet! Come as your favorite queer TV or movie character for an evening celebration at Sodo Park!

Ready yourself for LEVEL UP, NWFF’s veritable sit-down rager of an annual gala, as we regale you with some of our most profound revelations of 2020 and fond remembrances from the past quarter-century! Come feast with us as we reconnect with old friends, make new ones, and… play video games. 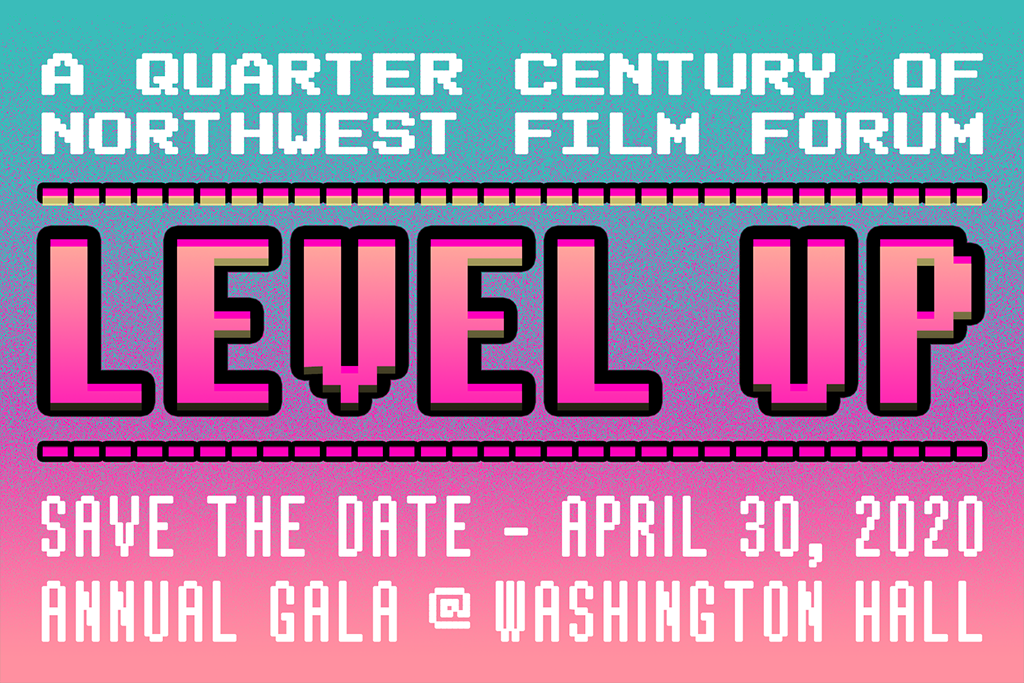 Founded in Seattle in 1995 as an independent film and arts nonprofit, Northwest Film Forum incites public dialogue and creative action through collective cinematic experiences. Each year the Forum presents hundreds of films, festivals, community events, multidisciplinary performances, and public discussions. As a comprehensive visual media organization, the Forum offers educational workshops and artist services for film and media makers at all stages of their development. nwfilmforum.org

Three Dollar Bill Cinema strengthens, connects, and reflects diverse communities three queer film and media. We provide access to films by, for, and about lesbian, gay, bisexual, transgender, and queer (LGBTQ+) people and their families, and a forum for LGBTQ+ filmmakers to share and discuss their work with audiences. threedollarbillcinema.org

2020 marks Gay City’s 25th year of building resilience and joy in LGBTQ communities. We are the leading HIV/STI tester in King County, and provide 100+ resources and a space for our LGBTQ people to grow, thrive, and be authentically themselves…a place to be you. Our mission is to cultivate access and connections to promote self-determination, liberation and joy in our communities. gaycity.org