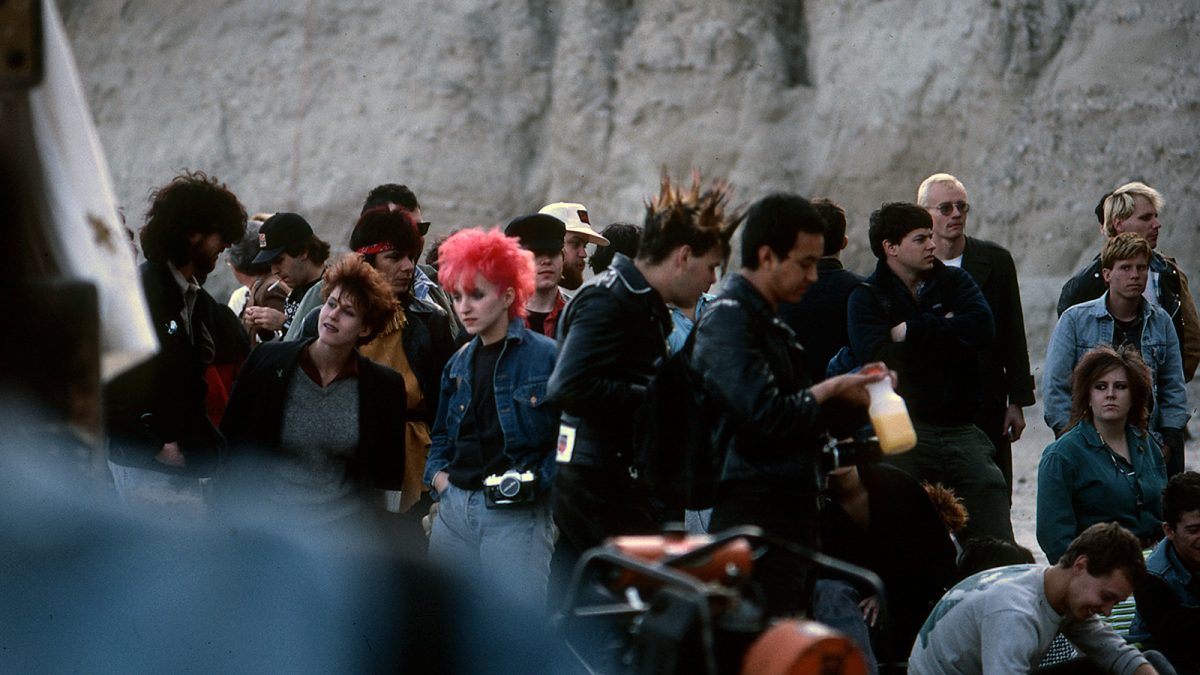 In today’s era of $400 three-day passes and $10 water bottles, it’s easy to take the notion of big music festivals in expansive natural settings for granted. But the earliest incarnations of this concept were something far rawer and weirder, more communal and more inclusive, comprising a story of punk rock brilliance and madness that long went untold.

This is Desolation Center, the tale of an eponymous series of DIY counterculture happenings in 1980s Los Angeles that led a movement of spikily-dressed youth to become wasteland wanderers on a long, strange bus ride to hear the finest, strangest, and loudest in punk, no wave, and industrial sounds.

The movement which would culminate in these desolate outings began in the divey counterculture rock clubs along Hollywood Boulevard, then frequented by cult punk and goth icons like Christian Death and The Screamers. Interviewers with clubgoers showcase the diversity of this underground, a space where decadent, disaffected weirdos and artistes of all identities could go to escape the segregated atmosphere and parochial ethos that typified Reagan’s vision of California.

However, this inclusive counterculture world couldn’t last in the moralistic and militarized policing climate of 1980s Hollywood, where the cops’ policy towards DIY performance spaces usually sought to terminate with extreme prejudice. A television reporter asks Chuck Dukowski of Black Flag if the punk movement is part of the Nazi movement. “No, that’s the police,” he responds matter-of factly. “That’s the Nazi movement”.

Following this crackdown, Desolation Center organizer Stuart Swezey sought new locations for music and performance events that would be more clandestine, more unpredictable, and which would reflect the confrontational ethos of the sounds that inspired him. At first, this journey for artistic freedom leads the Desolation Center to the blown-out industrial sector of Downtown LA, where rows of abandoned warehouses prove ample squatting grounds for guerrilla concerts. However, even these would prove too limiting; the burgeoning movement sought a truly desolate space, far from metropolitan boundaries, where anything could happen.

Around the same time as Desolation Center scouts out these industrial locales, we hear the heady, mechanical whirring and spartan rhythms of Throbbing Gristle, the cult UK electronic group who founded Industrial Records – and with it, the genre of the same name. While Desolation Center is an expression of the LA underground, it becomes the nexus point for sonic radicals across the nation and the globe.

Desolation Center’s genealogy of anti-commercial sound takes us to West Berlin, where Einstürzende Neubauten (translation: Collapsing New Buildings) create a new musical lexicon around the use of heavy machinery. It also gives us a glimpse of the New York No Wave scene, where groups like Sonic Youth and Swans are among the first to combine the dissonance and new instrumental techniques of the atonal composers with the raw power and amplitude of punk rock.

Desolation Center also heavily showcases what could be called an American wave of post-punk, with bands that took the loud, fast formula of guitar-bass-drums-let’s-go in nuanced new directions. At the center of the Desolation Center story are the Minutemen, a group of affable blue-collar guys from the port town of San Pedro, CA who fused the angular, hyperactive songwriting of UK groups like Wire with a West Coast sensibility and acerbic lyrics decrying the Reaganite USA. Another pivotal group was the Meat Puppets, whose blend of frenetic hardcore with melodic, country-tinged songcraft and way-out psychedelia inspired a young Kurt Cobain. With Perry Farrell of Jane’s Addiction frequenting the Desolation Center crowd, the groundwork was laid for what became the “Alternative Nation” of the ’90s.

After success with their first concert, Desolation Center recruits Mark Pauline, a transgressive sculptor known for his metallic automatons decked with pyrotechnics and explosives. With all the surreal and aggressive mechanical contraptions spewing fire in a cavalcade of nihilism, one would not be surprised if the event was called “Demolition Center.” A plan to blow up the side of a mountainous ridge is met with mixed enthusiasm as audience members weigh their environmentalist impulses against their love for wild, cathartic displays of mass destruction.

One of the most exhilarating scenes in Desolation Center is an uncompromising, ritualistic performance by Einstürzende Neubauten, bathed in glowing red light against the endless black expanse of the desert at night as frontman Blixa Bargeld screams and intones his strange directives. It’s a moment that took on a sense of ceremonial psychodrama for the audience that night, many of whom report a feeling of spiritual renewal and peace after the unrelenting intensity of the performance.

This segment also contains one of Desolation Center’s most tender moments, where a young man in the desert writes a letter back to his (very concerned) mother, awestruck and overjoyed to have heard a band that plays power tools as instruments – a sense of wide-eyed wonder which his mother instantly shares in and understands upon receiving the letter. Noise is often framed as something hostile, something deliberately alienating, but it can also be something ecstatic and unifying, a sound more viscerally immediate than any pop hook in its sheer physicality.

As the film explores the ways that Desolation Center inspired the later festival culture, from Burning Man to Coachella, the tone is elegiac, ambivalent and quietly frustrated. What was once the refuge of weirdos with a dream of life outside the images packaged by the conservative side of Hollywood has now become the playground of jet-setting celebrities and Silicon Valley entrepreneurs. There is historical prestige in prefiguring these huge spectacles, but the organizer of Desolation Center takes more pride in having never compromised his wild-eyed vision.

Desolation Center plays Oct. 4 & 9–10, 2019, with a director Q&A on opening night and a live performance by Masculinity Crisis on closing night. The film is co-presented by Fantagraphics, Sonic Boom Records, and Scarecrow Video.