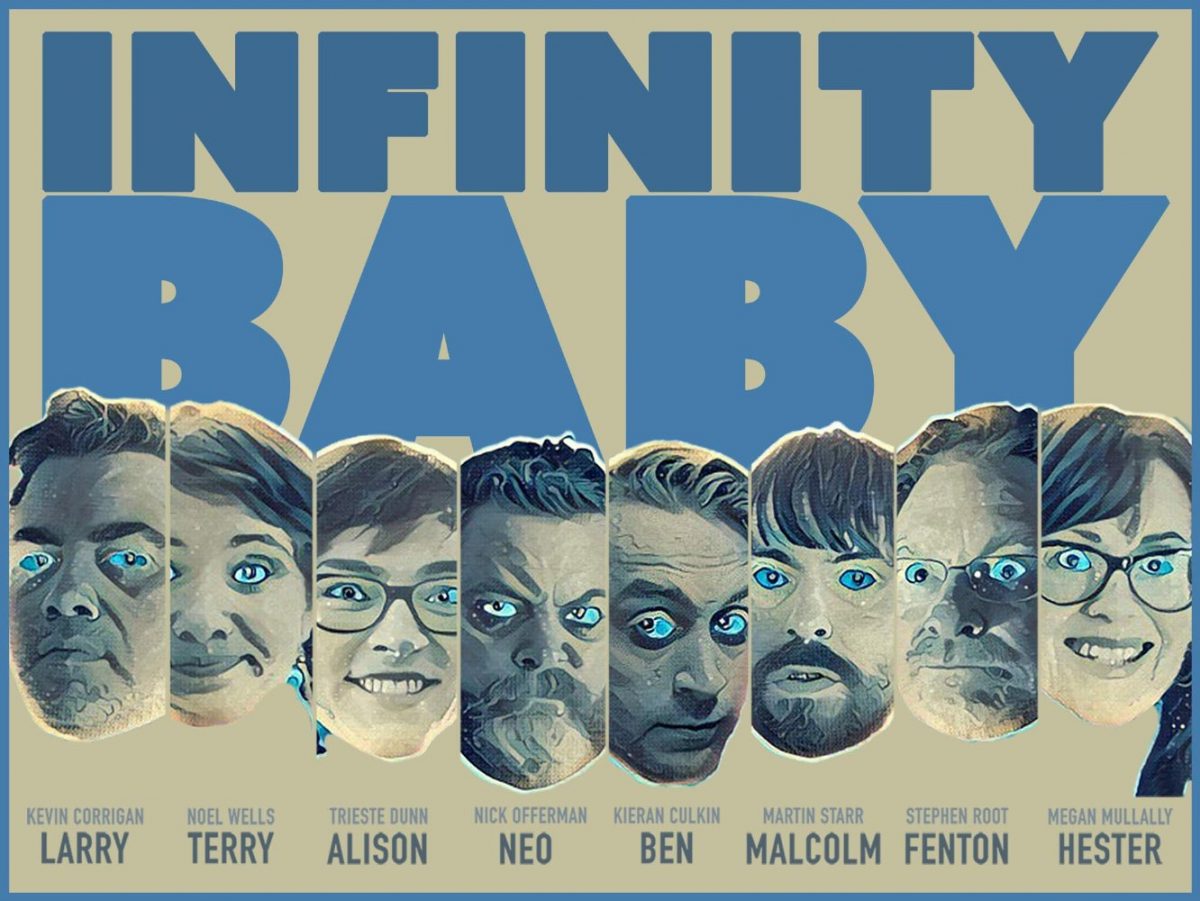 Reading press reviews for Bob Byington’s latest film, Infinity Baby, is a bit of a head-scratcher in-and-of-itself. Can one say it is a good thing for a film to be called “caustic” and “funny” in the same breath? How about “gleefully sardonic” or “skillfully obtuse”? It seems everything complimentary about this film is also tongue-in-cheek and contradictory, but that’s exactly the charm of the film’s unconventional and irreverent humor. After all, due to abortion being made illegal and stem cell research creating a number of “botched” successes, the film’s entire plot revolves around babies that never age, and their all-too-familiar conceptual extension: man-children.

Local filmmaker and Infinity Baby editor Kris Boustedt agrees that this film is “dissonant” and “abrasive” in its humor, but he, too, thinks that is a damn good thing. In this Q&A interview, he speaks with NWFF about his role working on this intentionally black and white feature film, editing for comedy, and navigating last-minute snafus.

Infinity Baby screens at Northwest Film Forum from February 7th to 11th.
Boustedt will be in attendance from the 7th through the 9th.
PURCHASE TICKETS HERE 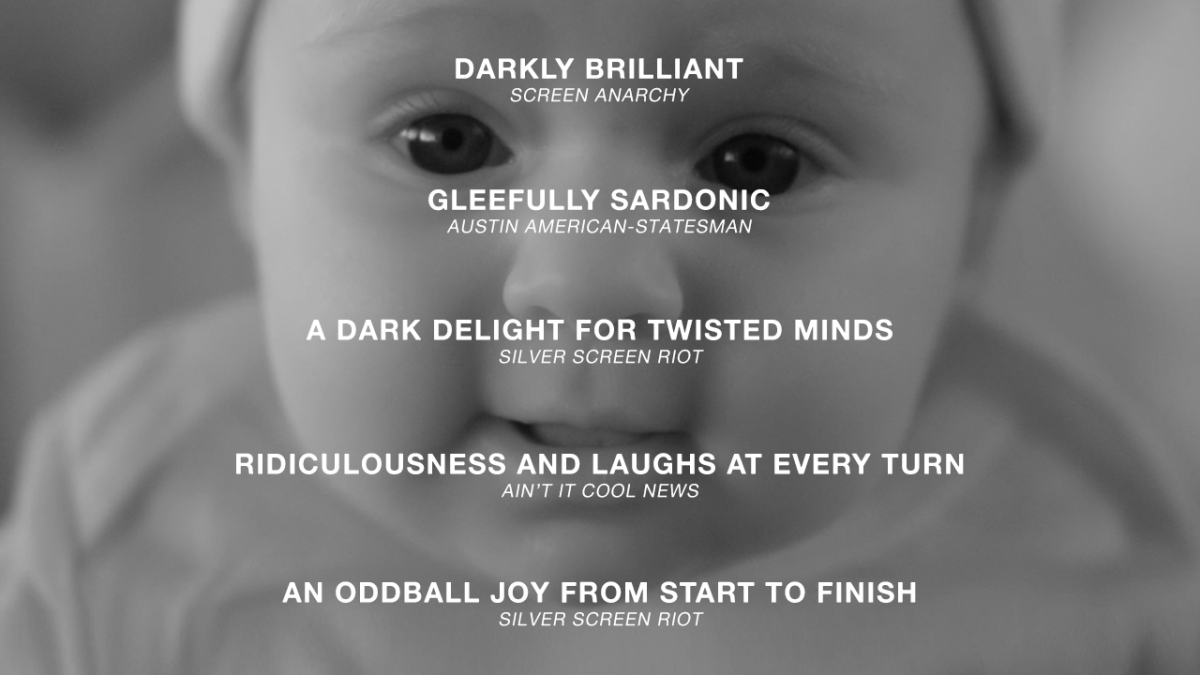 Let’s imagine for a moment that you have to quickly entice someone into watching this film. What’s your pitch? What tickles you most about Infinity Baby?

The movie, to me, is about connecting with people, and how fraught and neurotic that process can be and how isolating it is to only focus on surface-level connections (not actual vulnerability or risk).  Of course, the film does it in a way that is funny and abrasive, but by the end, there is hope.

It’s a tricky balance, to be biting and droll, but also be human.  To not undercut the viciousness or the humor with schmaltz.  But that’s what made me like the script, and that’s what I was trying to do with the edit — to never lose focus on delivering jokes while trying to prod the uncomfortable truths the movie hopefully addresses.

Can you talk a bit about the decision to have Infinity Baby in black and white? Was that something that was done in post or before? What does it contribute to the narrative?

It was a decision made in pre-production.  The film was shot ARRI Alexa XT Monochrome, so the footage was entirely black and white (with a few shots using the infrared feature of that camera; when we see The Baby, she was usually filmed with that filter to give her a surreal quality, a little Uncanny Valley).  So there were no options in post, which was great.  I wonder if we would have lost our nerve if it was shot in color.  I’m so happy we never had that choice.

There were some logistical considerations, of course.  While the movie does have a stellar cast, it is still a low-budget indie film, and shooting black and white (and with a sensitive camera) helped alleviate some of that.

But creatively, there’s a dissonance to the material that’s just funny: it’s set in the future, but it’s captured with a style that is reminiscent of the past that also adds, perhaps, a timelessness to it.  And there’s a bleakness to the monochrome that, for me, really emphasizes the arrested development of the characters.

How much improvisation was there during the shooting process? How did that influence the decisions you made as an editor?

Not a lot!  What was shot adhered pretty closely to what was written.  Obviously a lot of changes were made from the script in the edit, but it wasn’t an improvised movie.

Nick Offerman, though, added some great nuggets at the end of his takes/scenes, and some of that is in the movie.  There’s a line about Kombucha that always makes me laugh, and that was all Nick.  His character, Neo, is asking two other characters what they want to do now that a very serious meeting is over and he cycled through an invitation to eat lasagna, to go skeet shooting, to get hookers, and the one that’s ultimately in the movie. It’s nice to have those options, and it’s a great way to add improvisation in a way that doesn’t impact the structure of the scene (and is kind to the production logistics). 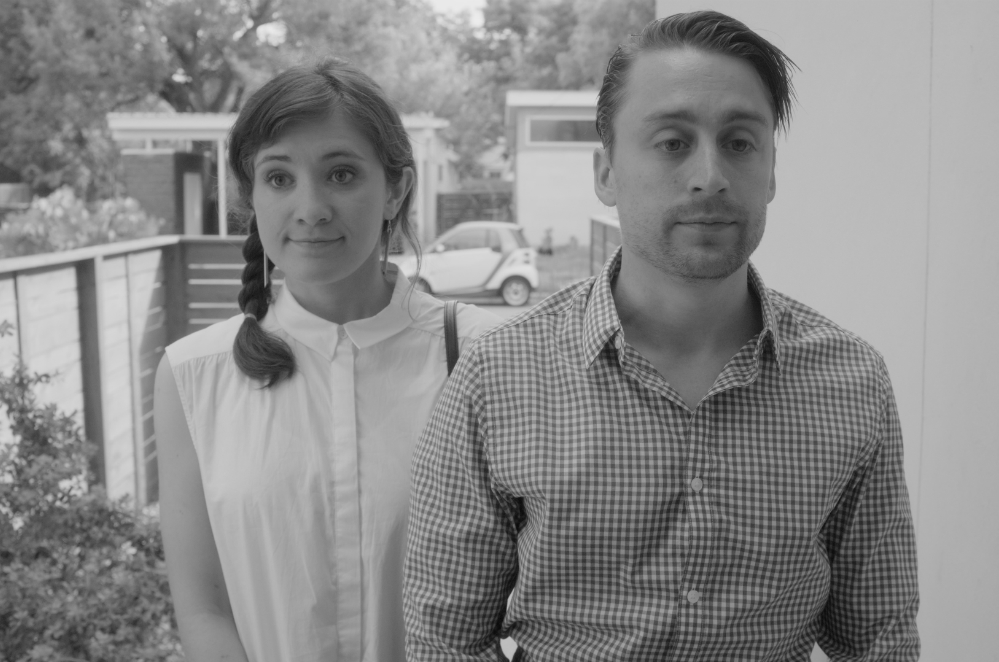 Were there any moments that didn’t make it into the film that you would like to share?

Oh gosh. As we were editing the film, there was a lot of whittling down.  It’s a comedy, so we wanted to make sure that the jokes were dense and frequent.

There are some scenes that lost half their run-time in favor of maximizing the humor.  And, of course, in that, we had to lose a lot of material that we liked but just didn’t fit.  There were a lot of moments in the scenes between Jennifer Prediger, Martin Starr and Kevin Corrigan that had to go for the sake of flow, for instance (including a funny Michael Caine impression from Kevin).  Oh, and, a moment that just popped into my head that made me laugh was Noel Wells running into a giant hedge as she exits a scene.

But yeah, as with any project, we definitely had to kill some babies.  That might be one of the most counter-intuitive aspects of cutting comedy.  Even if something is funny, it doesn’t mean it belongs in the movie.  The humor has to build on itself and, to a certain degree, be relentless.  So even if a moment is funny in and of itself, if it doesn’t push the characters, plot and humor of the entire film in the right direction, it has to go.

Much of your editing experience comes from working with shorts. What were some thoughts that stuck with you in editing this feature?

I’ve edited/co-edited two other features and yeah, a lot of shorts and corporate and commercial work.

I learned a lot on this film. This project really emphasized the, for lack of a better term, “sculptural” nature of editing for me.  Obviously I’ve been doing it for a while, so I’m no stranger to the shaping and re-shaping that occurs in the edit room, but there was something very organic and loose about our approach here. The process was very freeing in a way that was revelatory to me.

It was also my first film of this scale, and that was nerve-wracking at first. I definitely suffered from imposter syndrome when I first started editing (I was afraid of getting fired for weeks, not because I wasn’t doing the job, but, you know, thanks crushing lack of self confidence!), but Bob and I have a really good back and forth and, I think, an energy that is mutually beneficial.

He is very specific and knows when things are working or not working, but he’s also wonderfully collaborative and I love working in an environment like that.

Is there anything else interesting that you would like to add?

Just a funny story.  We edited the film in Austin, Seattle, Los Angeles and San Fransisco.  When in San Fransisco, we were making changes to the film the day before its screening at the film festival.  We were obviously under the gun, trying to get it to the poor print traffic folks in time for them to get it out to the theaters and test everything (thanks, festival staff!  You rock!).

As the evening wore on, I realized that the power adapter for our laptop stopped working.  I was exporting the film for the screening but the battery life was running dangerously low.  So I had to leave the hotel room and literally sprint (well, as fast as I could; I’m an editor) through Union Square in a cats-and-dogs downpour to the nearest Apple Store.  But meanwhile, back at the ranch, that battery was dying and that file was exporting and we had no time to start it over if we wanted to movie to, you know, screen the next day.

When I got into the Apple Store, all the gleaming white and glass, I was soaking wet and out of breath, desperately asking employees where the power adapters were while gasping for air.  I’m sure I made a great impression.

As stressful as that moment was in the moment, I can’t help but look back on it fondly and smile.  Ah, filmmaking.