We have a limited number of assistive listening devices available for programs hosted in our larger theater, Cinema 1. These devices are maintained by the Technical Director, and can be requested at the ticketing and concessions counter. Also available at the front desk is a Sensory Kit you can borrow, which includes a Communication Card, noise-reducing headphones, and fidget toys.

The Forum does NOT have assistive devices for the visually impaired, and is not (yet) a scent-free venue. Our commitment to increasing access for our audiences is ongoing, and we welcome all public input on the subject!

If you have additional specific questions about accessibility at our venue, please contact our Patron Services Manager at cris@nwfilmforum.org. Our phone number (206-329-2629) is voicemail-only, but we check it often.

Made possible due to a grant from Seattle Office of Arts & Culture, in partnership with Sensory Access, our Sensory Access document presents a visual and descriptive walk-through of the NWFF space. View it in advance of attending an in-person event at bit.ly/nwffsocialnarrativepdf, in order to prepare yourself for the experience.

** This film program opens with a 45-minute comedy set curated by The Disabled List with live captioning! **

Sometimes, tempering chaos with comedy is the only way to cope with a world gone mad. Interspecies feuds, close encounters with cults, and vampires with dietary restrictions populate this collection of darkly humorous shorts.

Kayla Brown is an activist, PhD student, and co-producer of The Disabled List.

Aimee is Deaf with a capital D (but contrary to popular opinion, she does not have BDE). She’s a mom of two kids who heckle her dad jokes, which probably means she’s ready to do stand-up. Seattle theatre fans may have recently seen her acting in GASLIGHT (Angel Street), or a staged reading of her full-length script AUTOCORRECT THINKS I’M DEAD.

Cheri Hardman captivates audiences with hilarious tales about being a plus size, menopausal babe. She won Tacoma Comedy Club’s “The Comedy Voice,” was a finalist in Nate Jackson’s Super Funny Comedy Club’s “Funniest MF Out Here” and performed in Seattle International Comedy Competition. Her bawdy, sassy style makes her the perfect host for “Heavy Petting with Cheri Hardman.”

Dan Hurwitz is a comedian, writer, and filmmaker. In 2019 he was a semifinalist in the Standup NBC national comedy competition.

Andy is a trans gal comedian from Seattle (by way of Baltimore). With her ten years of comedy she brings a witty, sardonic and slightly profane style to her jokes about navigating marriage, having a disability, and, most importantly, boob puns.
She has opened for Kyle Kinane, Whitmer Thomas, James Adomian, Gareth Reynolds and Cameron Epsosito. Festival-wise, she has done Bumbershoot, SF Sketchfest, Women in Comedy NW, Upper Left, Festival, Altercation, and All-Jane.
She also appeared in the HUMP! film-festival award-winning film “Queer Safari” and the Emmy award-winning movie “Star Wars Uncut” She was also a past Comic of the Week on the “Jackie & Laurie”.
You also may have heard her as a guest on many podcasts including: “The Sarah Silverman Podcast”, “Bananas with Kurt Braunholer & Scotty Landes”,“Improv4Humans with Matt Besser”, and “Lady 2 Lady with Brandie Posey, Tess Barker and Barbara Gray”.
“She’s a real cool lady” —Horatio Sanz (SNL)
“She’s really funny. Her last name has a lot of vowels too.” —Laurie Kilmartin (CONAN)
“Awesome.” —Kyle Kinane (Comedy Central)
Show lessRead more

Films in this program:

At the local talent show, an overeager judge wants to push the golden buzzer.

In a world where past lives are remembered, an ambitious academic’s life implodes the night he is recognized by a forgotten enemy…a small dog.

A guy’s life unravels after picking up a cursed golden ticket he mistakes as a good luck charm. A metaphorical [near dialogue-less] comedy about the toxic things we hold on to, even if they eventually destroy us.

Two best friends, Graham and Adrian, have secret feelings for each other which are brought boiling to the surface when they are trapped in a room with a bomb.

A gender-fluid Latine performance artist and a neurotic Asian American therapist are led by a series of uncanny circumstances into a world of chakras, spirits, and a cult leader that’s threatening to tear their friendship apart.

Jackie, a lonely, immortal, vegan vampire is tired of spending her undeath shunned from society. She starts a support group uniting vegans and vampires of the world. 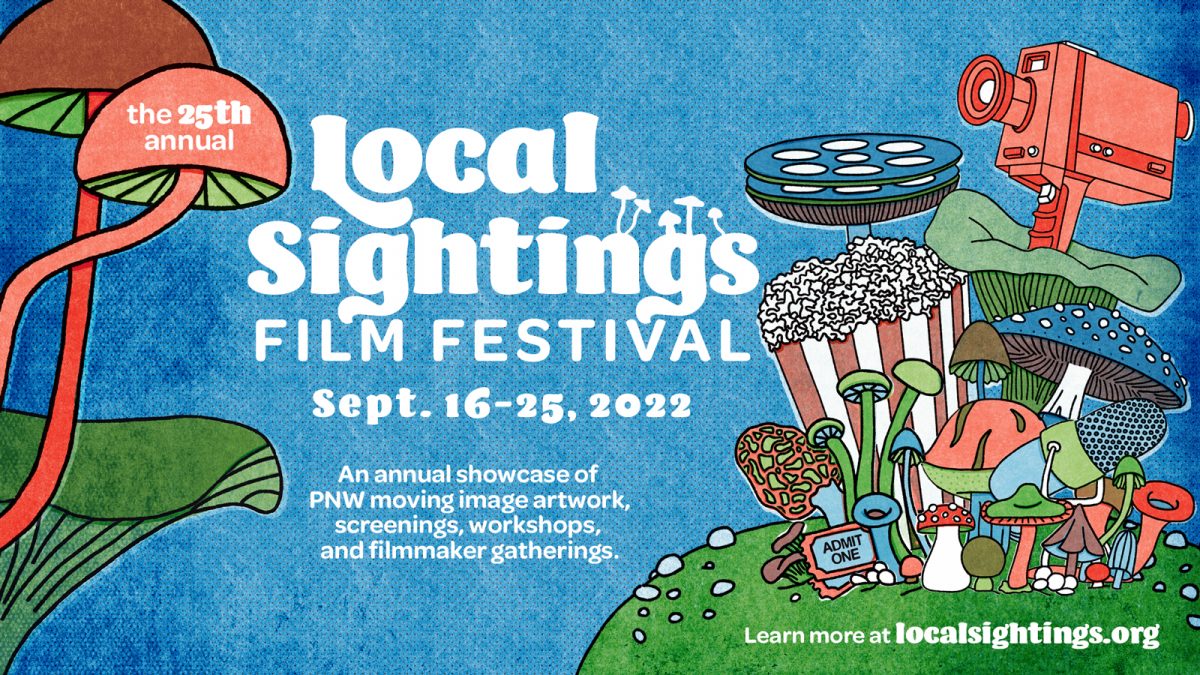 ⚠️ Please note: NWFF patrons will be required to wear masks that cover both nose and mouth while in the building. We are not currently checking vaccination cards.

Presented by Seattle’s Northwest Film Forum, the 25th Annual Local Sightings Film Festival is a virtual-and-in-person showcase of creative communities from throughout the Pacific Northwest. The 2022 program, which runs from September 16–25, features a competitive selection of curated short film programs and feature films, inviting regional artists to experiment, break, and remake popular conceptions around filmmaking and film exhibition.