In 2019 Sister Spit celebrates its 22nd year on the roads of the US.

The tour began in San Francisco in the 1990s as a weekly, girls-only open mic that was an alternative to the misogyny-soaked poetry open mics popular around the city at that time. Sister Spit became the first all-girl poetry roadshow at the end of the ’90s.

The tour was revived as Sister Spit: The Next Generation in 2007. In this next incarnation, out of respect to the changing gender landscape of our queer communities, the tour welcomed artists of all genders.

Sister Spit 2018 marked a new chapter in the tour’s history. As Radar Productions, the non-profit that houses Sister Spit, has shifted its vision toward Queer & Trans People of Color (QTPOC) specifically, so too had the tour shifted in lineup and style. 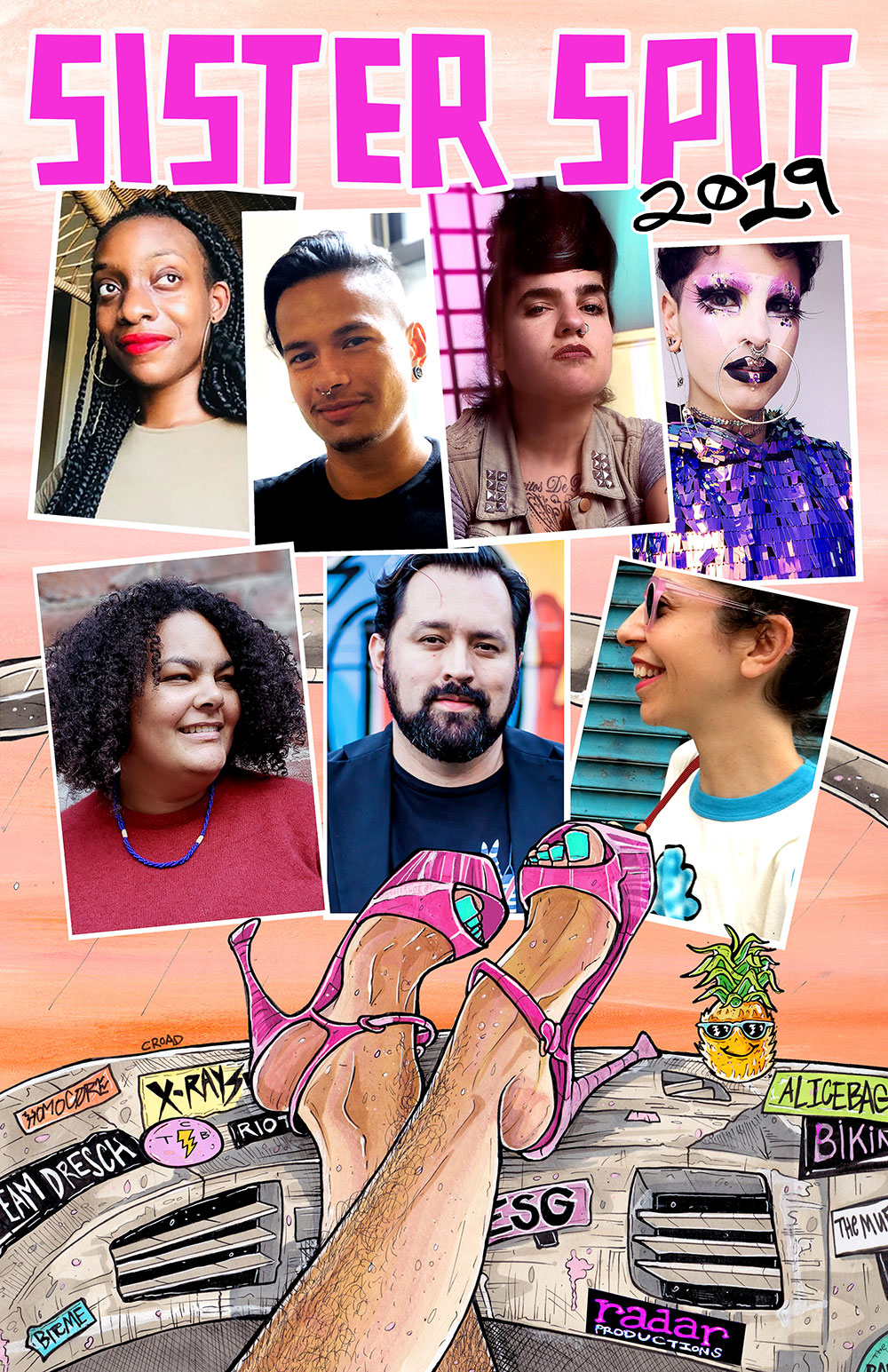 Juliana Delgado Lopera is an award-winning Colombian writer and historian based in San Francisco. The recipient of the 2014 Jackson Literary award, and a finalist of the Clark-Gross Novel award, she’s the author of ¡Cuéntamelo! an illustrated bilingual collection of oral histories by LGBT Latinx immigrants (Aunt Lute 2017) which won a 2018 Lambda Literary Award and Quiéreme (Nomadic Press 2017). She’s received fellowships from Brush Creek Foundation of the Arts, Lambda Literary Foundation, Yerba Buena Center for the Arts and The SF Grotto, and an individual artist grant from the SF Arts Commission. Her work has been nominated for a Pushcart Prize and published in various publications. She’s the creative director of RADAR Productions.

Baruch Porras Hernandez is a queer Mexican Immigrant from Toluca, Mexico. He is a writer, performer, storyteller, playwright and stand-up comedian, a two-time winner of Literary Death Match, a Lambda Literary Poetry Fellow, a Lambda Literary Playwriting Fellow, a two-time Pushcart Prize nominee, and was named a Bay Area Writer to Watch! in 2016 by 7×7 San Francisco Magazine. He is the founder and host of ¿Donde Esta Mi Gente? Latinx Literary Series, a regular KQED Arts host, and was the Voice of Shipwreck SF Erotic Fan Fiction Competition and podcast for four years and hosted the legendary SF Queer Open Mic for 7 years. His poems have been published in several anthologies and journals, both online and in print. Last summer he had the honor of being an artist in residence at the Ground Floor Summer Lab with Berkeley Repertory Theatre. He lives in San Francisco.

Austin Hernandez is a Tejano designer and writer living in Brooklyn. His creative work is strongly influenced by his mom’s second-wave feminist teachings, his family’s Mexican-American or Hispanic or Chicanx or Mexica or “just American” origins, and high school riot grrrl mix tapes. Through traveling, sharing, and storytelling by film and spoken word, he focuses on the feeling of estrangement from society and analyzing seemingly conflicting identities—transman with strong lesbian roots, a monolingual mestizo with bilingual family, and a working-class Texan, raised on homemade flour tortillas and fast food, turned tech anti-bro. He recently left an international corporate life to become a civic technologist, improving the ways governments provide services to the public. He sits on the board of directors for Maven, a nonprofit that empowers LGBTQ+ youth to use technology for social change.

Katie Fricas is a cartoonist and library worker from New York City. She makes non-fiction essay comics about art, politics, cultural events, oddities, and hidden histories in a wiggly, sloppy style for various publications and websites. She got her start illustrating for $pread Magazine (R.I.P) and self-publishing a comic about her life called Blabbermouth. Her work pops up in various anthologies, including the 2018 Ignatz Award-winning book, Comics for Choice, and she’s also published comics in the Guardian, Hyperallergic, the New Yorker, and a bunch of other shiny places. Her series Checked Out, about almost a decade spent working at NYC’s oldest Library, appears regularly on the website Spiralbound. When she isn’t scuttling all over NYC for work or elbow-deep in ink, she can be found scanning the funnie pages.

Katherine Agard is an interdisciplinary artist and writer from Trinidad and Tobago. She recently graduated from the MFA program in Writing from UC – San Diego and now lives in San Francisco. You can find her writing in Yes Femmes, Anmly, the Black Warrior Review and forthcoming in Feminist Studies.

Cristy C. Road is a Cuban-American artist, writer, and musician. Through visual art, storytelling, and punk rock music, C.Road has thrived to testify the beauty of the imperfect since she began creating art in her hometown of Miami, FL. She grew up as a self-taught figure-drawing artist with a penchant for all things that questioned society and began publishing Green’Zine in 1997 – a fanzine which was originally devoted to the punk rock group, Green Day. C.Road graduated from the the Ringling School of Art and Design in 2004 with a BFA in Illustration. In early 2006, C.Road released her first illustrated novel, Indestructible (Microcosm Publishing), a 96-page narrative about high school; and later in 2007, a collection of postcards entitled Distance Makes the Heart Grow Sick (Microcosm Publishing). In 2008, she released Bad Habits (Soft Skull Press), an illustrated story about healing from an abusive relationship; and lastly in 2013, her most recent book, Spit and Passion (Feminist Press, 2012), is a coming-out memoir about Cuban identity, discovering Green Day, and surviving in the closet. C.Road’s current project is The Next World Tarot (2017), a 78-card tarot deck detailing themes of justice, knowledge, accountability, and reclaimed magic.

Itoro Udofia is a first generation Nigerian writer, cultural worker, educator, and singer-songwriter based in Oakland, CA. You can find some of her writing in Slice Magazine, Meridians: Feminism, Race, Transnationalism, and the anthology Two Countries: US Daughters and Sons of Immigrant Parents published by Red Hen Press. She has received residencies and fellowships from the Vermont Studio Center, SAFEhouse Arts, Afro Urban Society, the San Francisco Writers Grotto, The Edward Albee Foundation and Summer Literary Seminars (SLS). She recently won third place in the Glimmer Train Very Short Fiction Award for her story, “To the Children Growing Up in the Aftermath of their Parents’ War.” Her music has been featured in the Black Choreographers Fest and the documusical based on Octavia Butler’s life, Octavia of Earth. Itoro’s currently writing her first novel, The Soil Below, a story following four generations of Nigerian women grappling with generational trauma, migration, and change as they weave themselves into the American fabric.

The Gospel of Eureka

Nocturnal Emissions – The People Under the Stairs