** This screening is followed by a 30-minute recorded Q&A on the film with Richard Block, Professor of German Studies at the University of Washington, and Goethe Pop Up’s Martin Schwartz **

Goethe Pop Up is thrilled to partner with Three Dollar Bill Cinema for a very special Pride edition of German Cinema Now!,  featuring the Seattle premiere of Oskar Roehler’s Enfant Terrible, an official selection at the 2020 Cannes Film Festival.

Rainer Werner Fassbinder (1945–1982): cruel, sensitive, childish, domineering, imaginative, egocentric. And, yes, an artist of genius with a fiendish work drive. What the New German Cinema luminary and queer icon Fassbinder is not, in Oskar Roehler’s (Jew Suss: Rise and Fall) appropriately unorthodox biopic, is redeemed by a phony narrative about the power of art. This is not a hagiography. This Fassbinder is crude to his friends, abusive to his collaborators, dismissive of the press, and simply awful to his lovers. He moves very, very fast. Masterfully, indelibly characterized by Oliver Masucci (Look Who’s Back, When Hitler Stole Pink Rabbit), he is all rough edges, pinched nasality, leather, droopy mustache, and dark glasses. The film does not valorize Fassbinder’s views or behavior vis-à-vis race, gender, or violence. Splashing in rage in a bathtub, this is an enfant terrible who is, almost literally, a terrible child. The great artist as sadist. Likability is off the table. Whether this Fassbinder can be loved is another story.

Enfant Terrible’s formal gambit is to make a Fassbinder movie as a Fassbinder movie, only one with RWF himself in the frame. The film capitalizes on speed of event, dramatic intensity, outrageous characterizations, gnomic dialogue, and artistic risk. Its characters are larger than life, yet its atmosphere is that of a claustrophobic, overheated world. The “rules” of conventional filmmaking do not apply. Enfant Terrible opens in a theatre, as the young nobody, looking tough and leaning on a wall while he lights a smoke, abruptly takes charge of a theatre production. In a way, the movie remains in the theatre. Whether Fassbinder is filming, in hotels or restaurants, gay bars, or his apartment, the film is set on sets, backed by cardboard or canvas walls, decorated by handwritten signs, and illuminated by wild, expressive lights.

With terrific forward motion, Enfant Terrible shows Masucci/Fassbinder as he collects and then, one by one, betrays a devoted core of collaborators (including Katja Riemann, Rosenstraße), and gains ever greater fame and ever greater control of his craft. (The imagined onset glimpses of Fassbinder’s best-known films are a cinephile’s delight.) He drinks oceans of Cuba Libre. He finds drugs. He complains. And most of all, he works. Enfant Terrible opens with an epigraph from Wilde: “…each man kills the thing he loves.” The manner of the killing and the things this Fassbinder loves are the subjects of Roehler’s strange and abiding film. (Martin Schwartz) 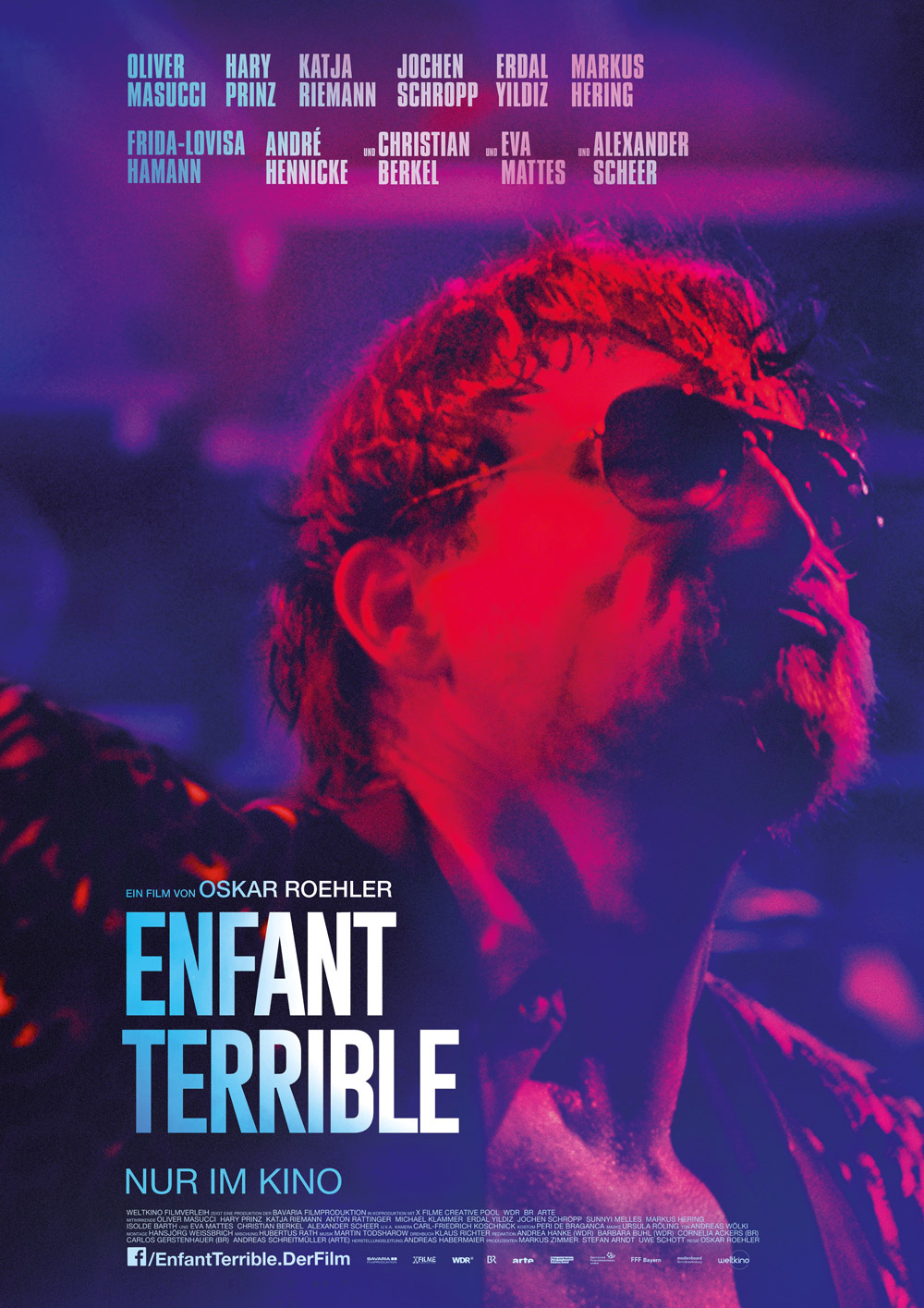 “Fassbinder was one of the few directors – or creative artists, full stop – who was a genuine bohemian, a sensualist, an anarchist and a real “disruptor”, a term that in our blander age applies to business gurus and political advisors. Oskar Röhler has created a heartfelt and appropriately awestruck portrait of the bleary Byron of the German new wave… Fassbinder was the nearest an auteur came to punk rock.” – Peter Bradshaw, The Guardian

“What makes the film distinctive is its non-illusionistic execution, using manifestly theatrical sets (by Roehler himself) and vivid stage-style lighting that takes its cue from the unreal flavour of Fassbinder’s own final film, Querelle (with that film’s theme tune, by Peer Raben, running as a leitmotif through Martin Todsharow’s score).” – Jonathan Romney, Screen Daily 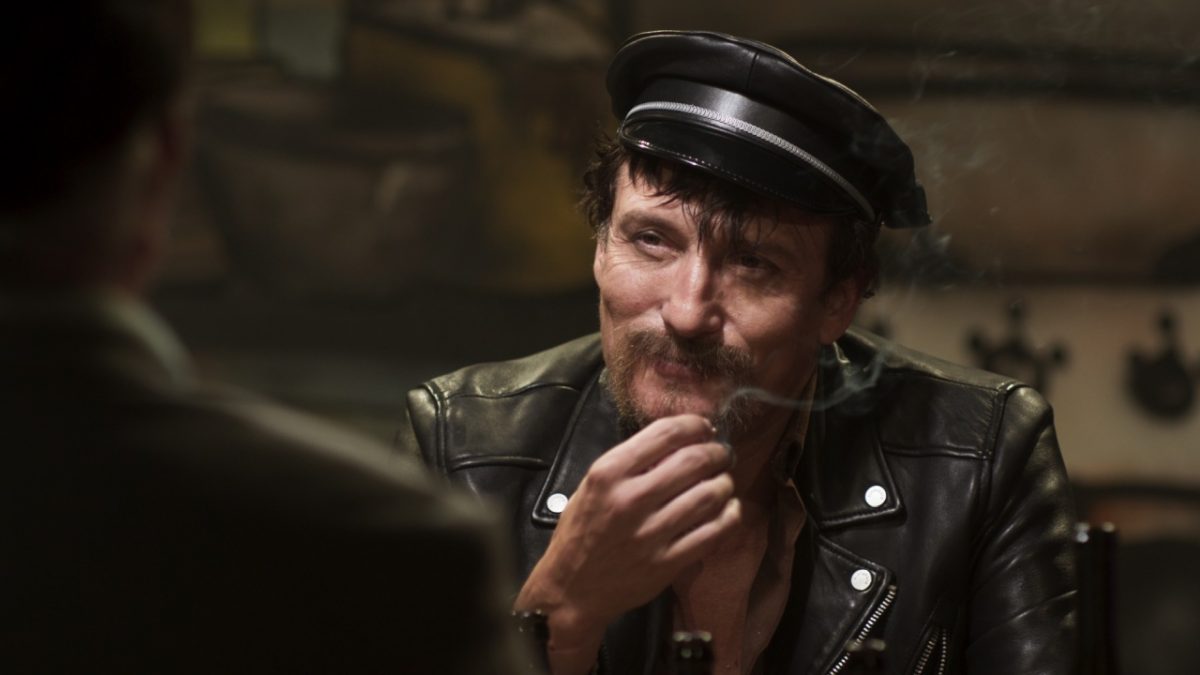 Oskar Roehler started his career as a screenwriter and had his breakthrough with his second feature No Place to Go (2000, a very personal portrait of his mother, which premiered in Cannes (Director’s Fortnight) and received the German Film Award (Lola) for best film. His other award-winning films include Angst (Der alte Affe Angst, 2003 – Berlinale Official Competition), Agnes and his Brothers (Agnes und seine Brüder; 2004 – Venice Orizzonti) as well as his film adaptation of Michel Houellebecq’s novel Elementary Particles (Elementarteilchen; 2006 – Berlinale Official Competition). With Jew Suss: Rise and Fall (Jud Süss – Film ohne Gewissen; 2010 – Berlinale Official Competition) Oskar created one of his most polarizing films. After Sources of Life (Die Quellen des Lebens; 2012 – Karlovy Vary Official Competition) and Outmastered (Herrliche Zeiten; 2018), Enfant Terrible is Oskar’s latest film and homage to one of the most legendary and radical German filmmakers, Rainer Werner Fassbinder.