** Please note: Strobe lights will be used during the performance. **

** Dollhouse is partially funded through generous support from the City of Seattle Office of Arts & Culture. **

Simone Pin presents Dollhouse, a Southern Gothic burlesque. Welcome to the dark side, y’all… where you can find a dose of sinister, a dash of grotesque, and a whole lotta sin. What twisted secrets are Mama and her Dollhouse Coven keeping? What delusional dreams nest behind those charming doll eyes? Prepare to have a hauntingly beautiful time in the Dollhouse, and don’t let the door hit ya where the good lord split ya, darlin’!

Simone Pin is back again to bring you another mind-blowing show to their residency at Northwest Film Forum. Dollhouse includes technical choreography by Shay Simone, drawing inspiration from Southern Gothic stories and reclaiming diverse bodies and skin to celebrate female roles.

Halloween Night (Oct. 31) includes access to an after-party at the Forum, with libations and a DJ set. 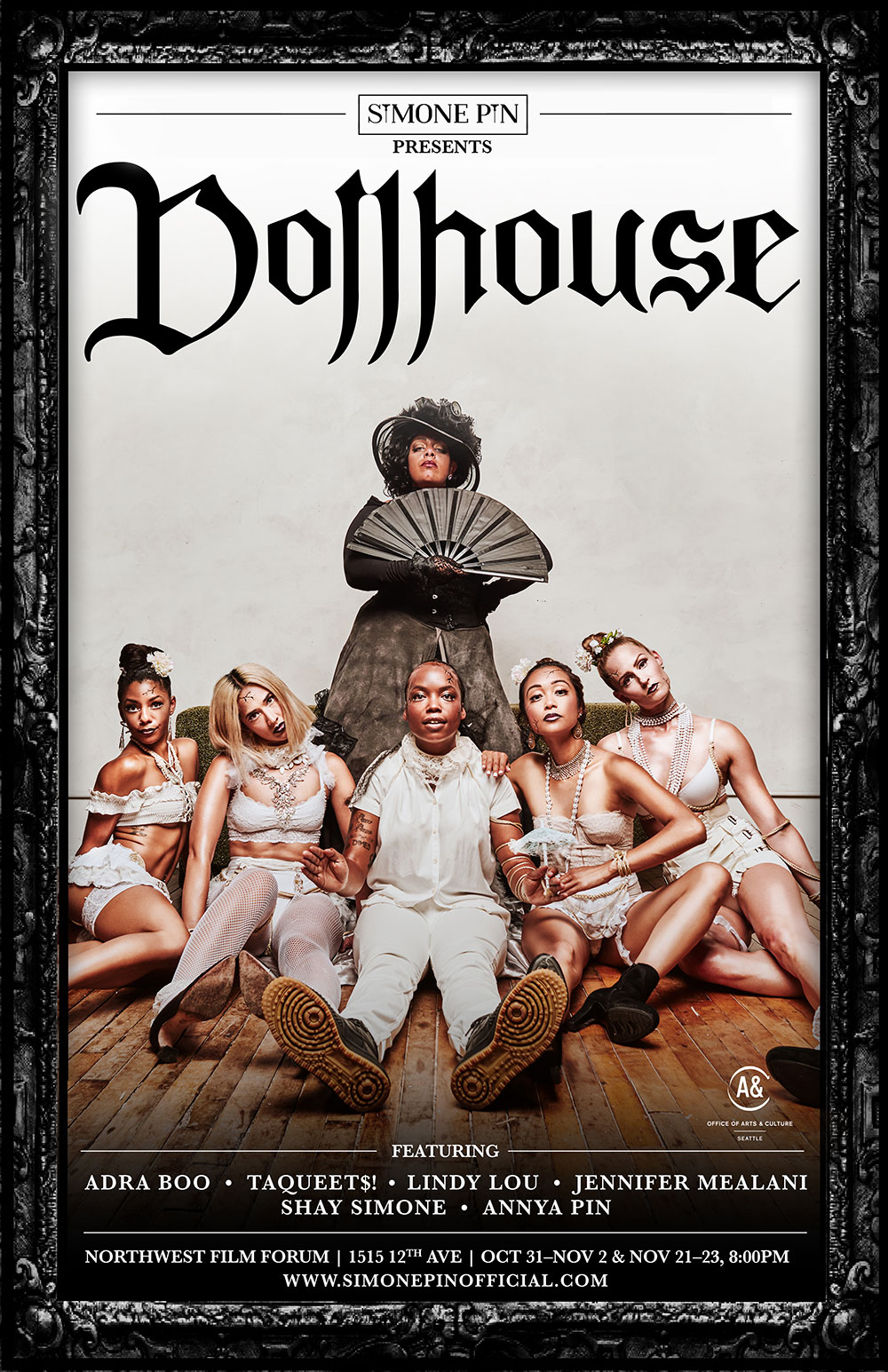 † VIP Experience tickets for all shows include:

$75 General Admission pass to regularly-priced showings of Queens and Dollhouse! 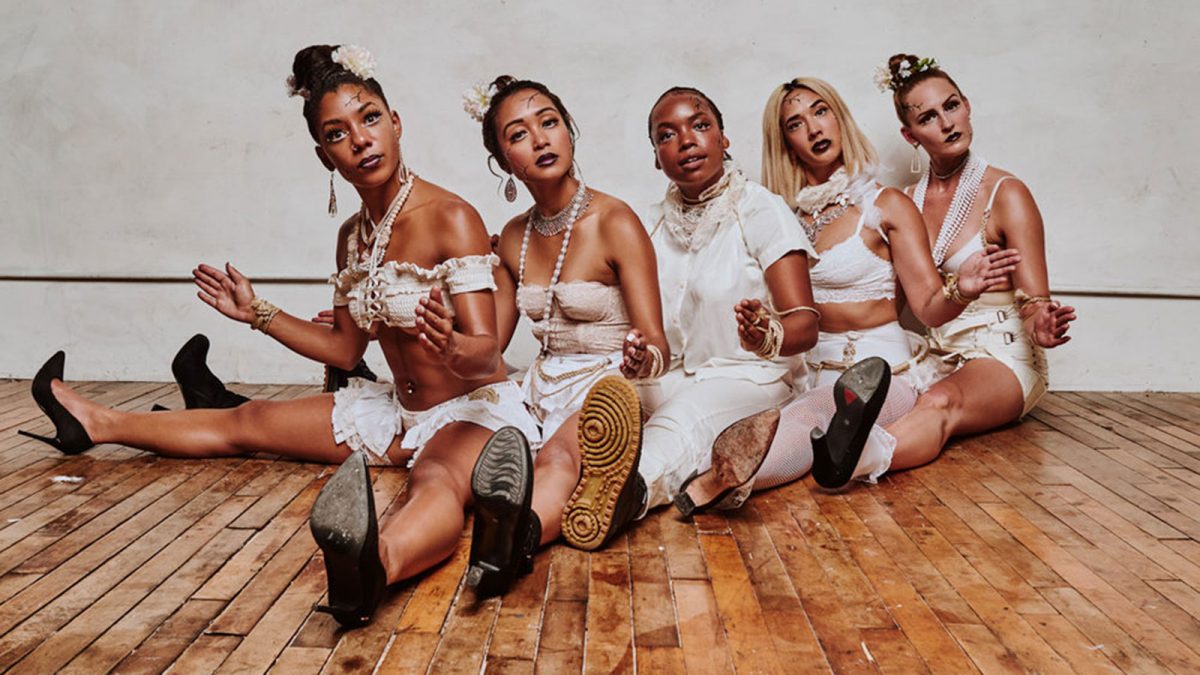 Mama of the Dollhouse, Adra Boo

Seattle soul singer, teacher and actress, Adra Boo, walks through walls. While some in the age look to construct boxes for others, Boo flouts these efforts, working to inspire through interconnectivity, sacrifice and, of course, a touch of sweetness. Formerly known in the Emerald City as one half of the electric-funk duo, Fly Moon Royalty, which has shared stages with the likes of Sharon Jones & The Dap Kings and Macklemore, Boo also performs regularly as a solo artist or as a featured singer for musicians like Erik Blood, Vox Mod, Massy Ferguson, and the Grammy Award-winning composer and Seattle native, Andrew Joslyn. Currently, she is the newest member of Seattle’s new wave noir band, Hotels, which has been proving to give the band’s sound new energy, and in this new arrangement, not even the sky is the limit.

When not singing, however, Boo works in her community in multiple facets, including holding a board seat with the Pacific Northwest Grammy Chapter, and directing the Seattle Ladies Rock Camp, energizing womxn and gender non-binary individuals towards living their best lives, musically and beyond. Boo is also a regular emcee for summer music festivals, burlesque and cabaret, and a former festival correspondent for the award-winning alternative weekly, The Stranger.

A veteran performer on a myriad stages, Boo has been compared to timeless musicians like Aretha Franklin and Tina Turner, unafraid to ruffle feathers or rouse would-be audiences. And while all of these efforts cause her to stand out in the city, it’s her work as an artistic liaison that has made her a local legend.

Shay Simone is originally from the east coast where she began her dance journey training in Vaganova Ballet with Evgenia Singur and Bat Udval from The Russian State Ballet of Moscow. She has competed in nation wide dance competitions performing in a variety of styles such as Jazz, Hip Hop, Contemporary and Pointe. She then moved to the Big Apple where she was featured in Dance Spirit Magazine, Good Morning America and completed Broadway Dance Center Professional Semester program. In 2013, Shay was accepted into The Edge Scholarship Program in Los Angeles, California to train with the top choreographers and teachers in the industry and thus began her commercial dance career.

Since then Shay decided to relocate a third time to Seattle, Washington to take on the world of Burlesque. Shay quickly became a crowd favorite at the Can Can Culinary Cabaret where she performed in six different burlesque productions. While actively performing at various venues in the city Shay is currently giving back to the youth community twice a week by training and inspiring young dancers in the Poulsbo area.

You can also catch Shay in her Adult Heels class at Belltown Dance Studio every Thursday evening and Adult Burlesque Heels class at Westlake Dance Center every Saturday. She has teamed up with business partner and dear friend Annya Pin to create Simone Pin. A women of color owned production company curating technical burlesque shows. As the Founding Artistic Director of Simone Pin, Shay takes the lead in choreography, costume design and concept of the shows.

Annya Pin is originally from Indonesia and found a passion for performing since a young age. Her performances exude sex, sass and sultriness, and she blends elements of her performances with her eclectic dance background in traditional Javanese and Balinese dancing, West African, hip hop, cabaret and burlesque.

After moving to Seattle in 2012, Annya joined the Can Can Culinary Cabaret cast as part of the Heavenly Spies and performed in Zombie Cheerleaders, The Midnight Show, Kitty Kat Club and Diamonds. Besides the stage, you can also find Annya Pin in the music videos of local Seattle musicians including Prom Queen, Caela Bailey and The Pazific.

Annya Pin is inspired in using the stage as a creative outlet to express themes she finds in her day-time career and brings her 10 year experience of working in project management to her role as Founding Director of Operations in Simone Pin Productions. As a co-producer with her close friend and creative-business partner Shay Simone, Annya Pin looks forward to exploring ways to mix burlesque with other genres and shaping a space for women of color and diverse body types to be celebrated.

TAQUEET$! is the Physical Representation of Sound. A freestyle dancer who created a unique style of performance that utilizes a multitude of disciplines and turns music into visual art. With roots in Tap and Ballet, coupled with self taught street styles, this Seattle native seeks to incite conversation and contemplation with every movement.

Lindy Lou Smith, originally from a small town in Oregon, has been “finding herself” (in all of the ways) on the stage for the last 20 years. She graduated from Cornish College of the Arts in 2016 with a B.F.A. in Dance Performance and since then has been seen on stage in Seattle with Can Can Culinary Cabaret, Queer Burlesque at Queer Bar, and Simone Pin Productions. With Simone Pin, she has been honored to have been featured in their productions of Dollhouse, Queens, and Queens of Cascadia. Over the years she has toured professionally with companies such as Eugene Ballet Company, Eugene Youth Ballet, and Dance Theatre of Oregon, and has garnered a large repertoire of musical theatre experience as an actress, singer, dancer, choreographer, and dance captain. She is always up for new adventures, on stage and off, and is thankful for every sparkly one that comes her way.

Jennifer Mealani, originally from outside of Baltimore, is happy to be in Seattle after performing all over the country for the last 5 years. She played “Penny” in the National Tour of Dirty Dancing, she’s done movies, shows, and commercials in LA, danced in New York with Broadway’s finest, and now performs across Seattle with House Verlaine, Simone Pin, and Valtesse. 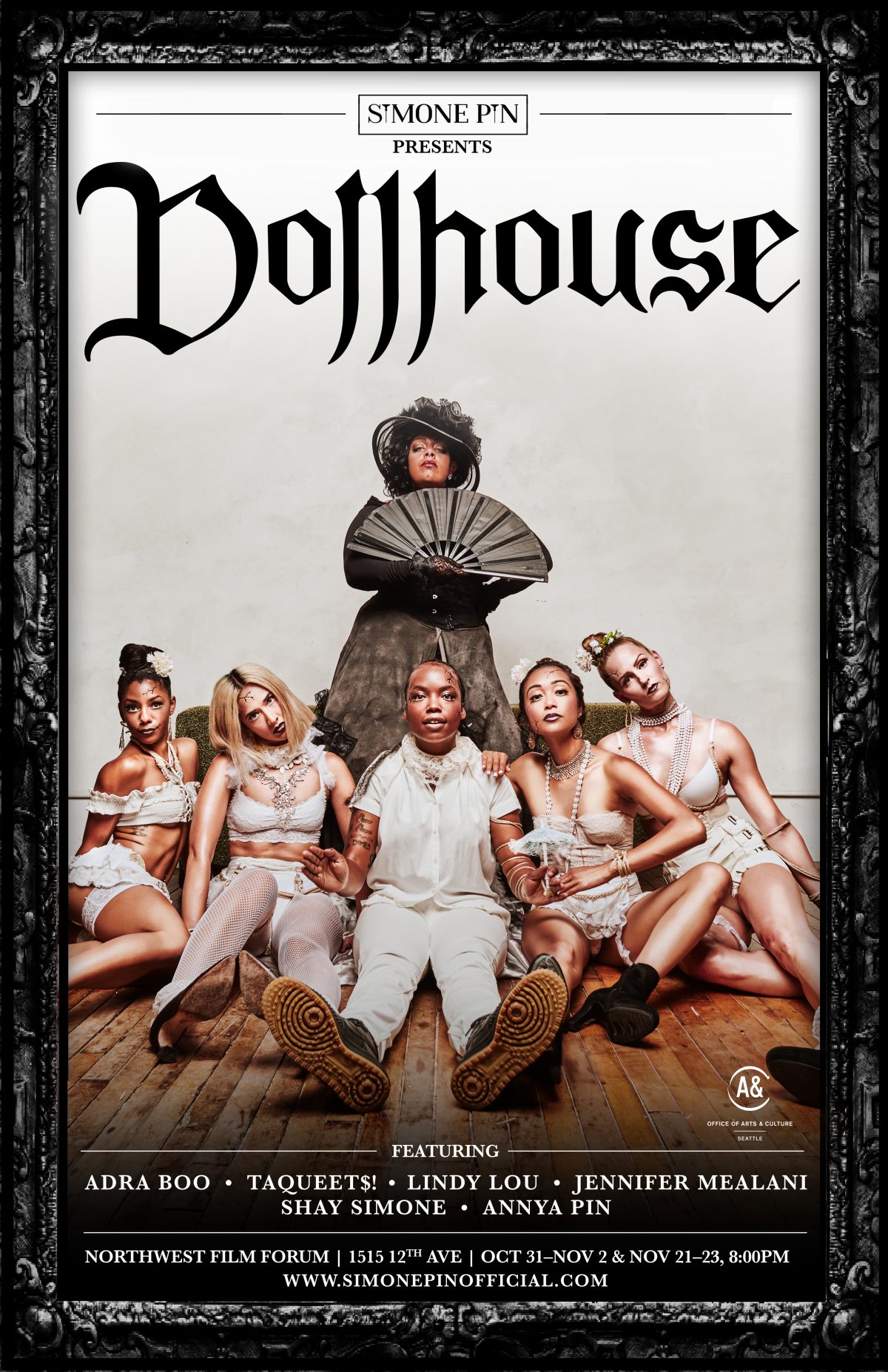