After years of living it up, with two degrees in the bag but not a penny to her name and no meaningful purpose in life, Toni is now in her late twenties and is having an identity crisis. An inheritance serves as a welcome excuse to leave her cosmopolitan life behind and return to the village whose narrow confines she once fled. But this new beginning goes badly awry. As an intern in the local section of the regional newspaper, she feels totally undervalued and at home her interfering parents scarcely give her any room to breathe. Luckily she meets the fun-loving Rosa who helps her see her old stamping ground anew. Wild moped rides and nightly outings bring her back to life. But the more Rosa becomes attracted to the beautiful Toni, who seems only to think about herself, the more explosive the relationship becomes. The film delineates the search for identity of two women in a village that is increasingly being confronted by an ever more complex world.

Using a mixture of documentary footage and working with amateur actors who speak in their own vernacular, the authentic atmosphere of a real village is recreated in a fictional story, revealing the deep identity conflicts within.

The framework is a story in which traditional narrative patterns and characters of peasant theatre or the classic Heimatfilm are reflected. These are initially infiltrated by subversive style and postmodern narrative and thus re-invented, with vernacular language and organic camera work serving as stylistic devices. 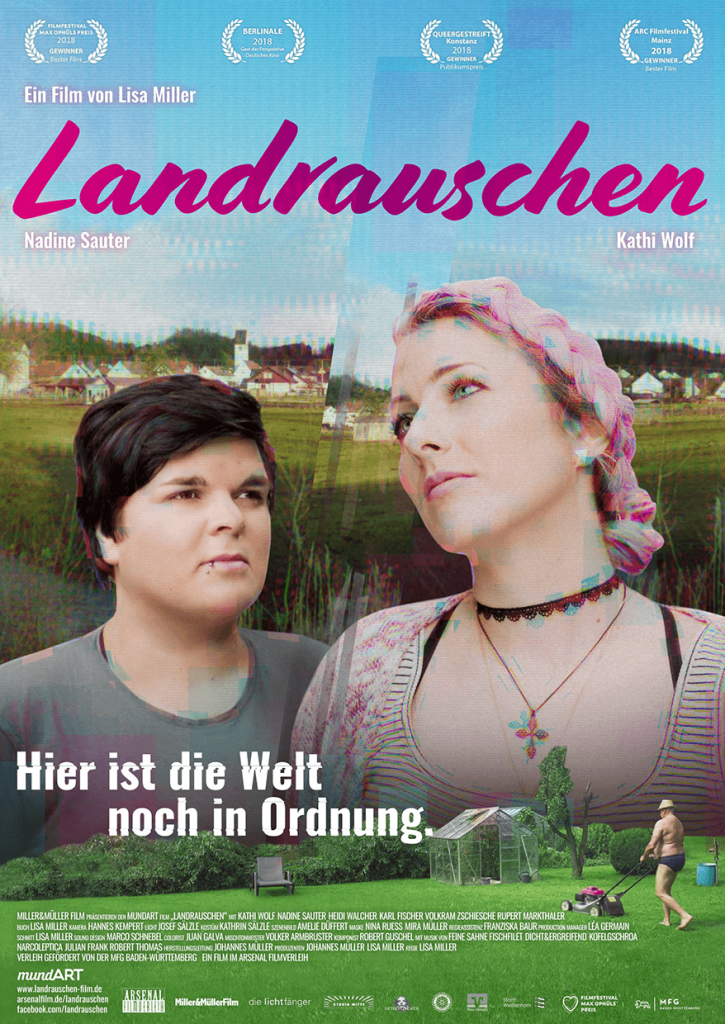 Lisa Miller studied visual arts and photography in Madrid and London has worked as a freelance film director and lecturer. She taught at the Bavarian Summer Academy and is a member of the Künstlerhaus Ulm. Miller has directed numerous theatre and video performances including “Mir san mir” at the InVitro Festival and the Galerie Kloster Roggenburg and “Collateral Murder #2”, performed at the 100 Grad Festival in Berlin. Her short film Marie won the prize for Best Short Film at the CEV Madrid. Her experimental mockumentary Chernobyl, Fukushima, Gundremmingen criticized the use of nuclear power on a local level.

Landrauschen was filmed without public film funding and with the help of a crowdfunding campaign on Startnext and local sponsors. In January 2018, the film won the Max Ophüls Award for Best Feature Film and Best Screenplay, among others.